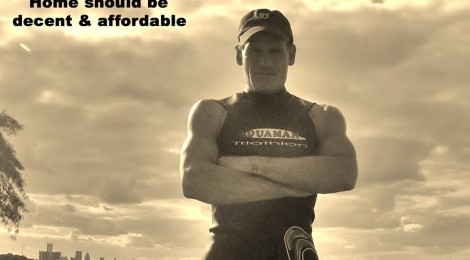 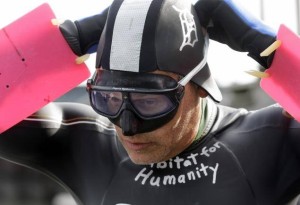 If you don’t know the name Jim Dreyer yet, chances are you don’t know how determined the endurance swimmer is in completing challenges. Fresh off a rotator cuff injury, Dreyer will attempt to do the impossible August 15th. Dreyer, who has already swam across all five Great Lakes, will tow a new Lincoln MKC on a barge from St. Ignace to Mackinac Island.

Dreyer will attempt his most strenuous aquatic feat yet, despite being less than 100% recovered from a shoulder injury. “The most powerful muscle in your body figuratively is your heart”, Dreyer said. Dreyer, who has been an avid supporter and fundraiser for Habitat for Humanity also had this to say, “The mission of Habitat for Humanity is close to my heart and larger than I, and therefore also larger than this obstacle. Pain won’t stop me. As long as my shoulder is functional, I will swim.” Those are incredible words from the endurance swimmer in his attempt to pull 16.5 tons 3.58 miles in the water.

If you are doubting Dreyer can accomplish this feat, I would invite you to check out this video from the History Channel’s “Stan Lee’s Superhumans”. On this episode Dreyer was told he could not pull a 27 ton car ferry 800 yards. Dreyer not only accomplished it in the four hours he estimated it would take, but completed the task in less than 54 minutes. 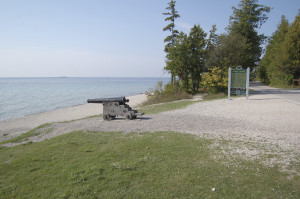 On August 15th, Dreyer will leave St. Ignace at 6am and swim towards the British Landing docks on Mackinac Island in an event called the “Pfeiffer Lincoln Murdick’s Fudge Run”. He estimates the swim will take up to 20 hours to complete. Dreyer will be pulling a new Lincoln MKC from Pfeiffer Lincoln. A two year lease on the vehicle will be raffled off later this year (see details below).

Thanks to Arnold Ferry, spectators can now get a better view of Dreyer’s mission and cheer him on. The Mackinac ferry line is running two “Sip n Sail” cruises (buy tickets here) on the day of Dreyer’s swim. The first cruise will depart St. Ignace at 1:30 pm and head to Mackinac Island. A second cruise will leave Mackinac Island at 5:30 pm and head to St. Ignace. Both cruises will feature a cash bar. Tickets are $30 for adults and $10 for children under 18. If you’re unable to watch Dreyer compete in person, you can follow along online to see his progress.

Dreyer will return to the water near Mackinac in September to lead the Mighty Mac Swim, an event that will see 84 swimmers take the challenge of swimming across the Straits of Mackinac. The event coincides with the annual Labor Day Bridge Walk on the Mackinac Bridge. That event will raise money for Habitat for Humanity and has already raised $270,000 to date.

Want to help Dreyer and his crew in their fundraising efforts? An ongoing sale of raffle tickets is the major fundraising effort. People can buy raffle tickets for $20. The prizes are the two year lease on the Lincoln MKC, a luxurious vacation to a five star hotel in Wisconsin (The American Club), and two $500 cash prizes. To sweeten the pot, sponsor Murdick’s Fudge is also adding one ½ pound of fudge to the grand prize for every $20 raised.

For more on Dreyer, you’ll want to check out his five favorite places in Michigan he shared with us previously. Dreyer was also featured in a story for the August/September issue of Lake Superior Magazine.