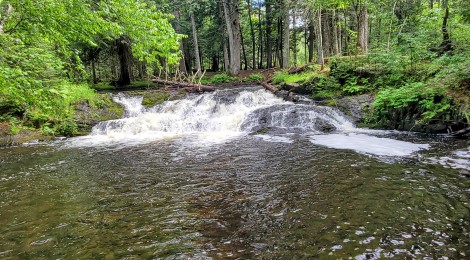 Jumbo Falls: A Secluded Waterfall in the Ottawa National Forest 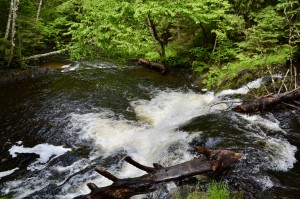 Waterfalls have always been one of our favorite things to find in Michigan’s Upper Peninsula, and we recently had a chance to return to Jumbo Falls in Houghton County to get some better pictures. Jumbo Falls gets its name from its location on the Jumbo River and not from its size. While it is a relatively small waterfall in comparison to others in the area, its beautiful setting makes it worth visiting. It has been some time since we posted a “new” waterfall here so I was glad we were able to visit Jumbo Falls on a June 2022 trip to the Upper Peninsula. 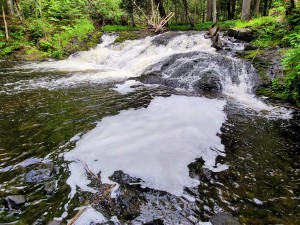 The Jumbo River is known for being a great spot for brook trout fishing. The river slowly winds through the old forest here as tall cedar trees line the banks. Jumbo Falls is only three to five feet in height at a point where the river is 10 feet wide. This waterfall is not visited as frequently as neighboring sites like Bond Falls or Agate Falls, which may add to its appeal for some. 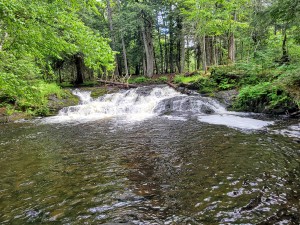 The hike back to Jumbo Falls is an easy one and you should be able to hear the river and the waterfall after you park your vehicle. A well-worn path leads through the forest before reaching Jumbo Falls after a few hundred yards. You may want boots here as it can be muddy after recent rainfall, and be prepared with the bug spray and mosquito netting as well. 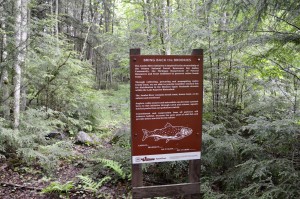 To get to Jumbo Falls, from M-28 (west of Kenton) head south on Golden Glow Rd. Follow Golden Glow Rd. for almost two miles, turning left at the first major intersection. After .3 miles, bear right at the fork (Google Maps has this labeled as CR-4589-B) and follow that drive for about a mile and a half. You will pass through and old gravel pit after a mile, continue straight as the road narrows and look for parking by the trout sign shown above.