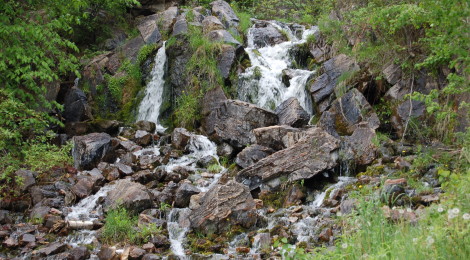 Fumee Falls is so easy to visit that it should never be missed. Located in a roadside park off of US-2, these falls may not be the biggest (and at times may not have much flow), but the setting is peaceful and a great place for a quick stretch or a picnic.

From the parking lot it is easy to hear the sound of falling water, and a short walk leads to this view of the falls and a footbridge:

Up close, the falls are spectacular more in setting than power, and this is a very seasonal falls – don’t expect much water flow in dry summer months.

There is a path and some stairs that lead to an upper set of falls, also be sure to check out informational plaques and heed their warnings about staying on the trail to prevent erosion (they have had problems here in the past).

The parking lot also features a Michigan historical marker that tells of the Menominee Iron Range and its impact on the local area throughout history:

“This range, named for the Menominee River which runs through part of it, is one of the great iron districts in the Upper Peninsula. In 1846 Wm. A. Burt, the discoverer of the Marquette Iron Range, noted signs of iron ore in the Crystal Falls area. In 1849, federal geologist J. W. Foster found ore near Lake Antoine and two years later he and J. D. Whitney confirmed Burt’s report on the Crystal Falls district. The first mining activity began in 1872 at the Breen Mine where ore had been discovered in the 60’s by the Breen brothers, timber cruisers from Menominee. Development of the range was delayed until a railroad could be built from Escanaba. The Breen and Vulcan mine shipped 10,405 tons of ore in 1877 when the railroad was built as far as Quinnesec. By 1880 it reached Iron Mountain and Florence, and in 1882 tracks were laid to Crystal Falls and Iron River. Twenty-two mines made shipments of ore that year. A few crumbling ruins are all that remain of most of them, but in subsequent decades more mines were developed which have produced vast amounts of ore for America’s iron and steel mills.”

Here is a short video of Fumee Falls from June 2013:

Directions: the Fumee Falls rest area is on US-2 between Iron Mountain and Norway, and it’s pretty hard to miss.

Be prepared for: seasonal waterflow changes, some steep steps to upper section.