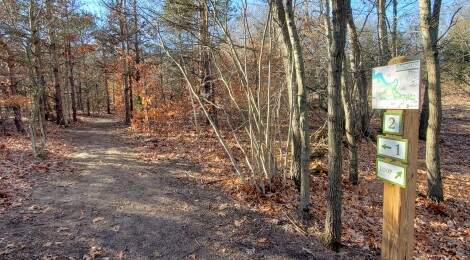 Michigan Trail Tuesdays is our attempt to showcase a different trail or trail segment each week. The Mitten State is home to thousands of miles of trails, including the new Iron Belle Trail that runs from Detroit in the southeast to Ironwood in the western Upper Peninsula and more miles of the North Country Trail than any other state.

Our efforts to visit each of the parks in the Ottawa County Parks system has led us to some amazing places in 2021, including Hager Park in Jenison and Spring Grove Park in Grandville. We recently took advantage of some warmer December weather to check out a few parks in the Grand Haven area. Stearns Creek Park is located at the site of a family farm that used to grow crops and raise foxes; it is now home to nearly two miles of trails and opportunities for outdoor recreation and wildlife watching. Opened in 2019, this is one of the newer additions to Ottawa County Parks. 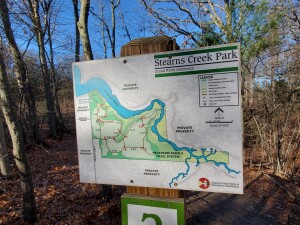 Ottawa County Parks notes: “Located at the headwaters of the Grand River’s Stearns Bayou, Stearns Creek Park is a key piece of Ottawa County’s Grand River Greenway, a system of protected natural lands along the river and its tributaries. With over a mile of creek frontage, diverse wetlands, picturesque ravines, and tracts of older growth forests, Stearns Creek Park is an ecological treasure for both recreation and wildlife. Although much of its 118 acres was worked for decades, the wetlands and shoreline are among the highest quality in the Ottawa County park system.Even the extensive old pine plantations across the interior of the site harbor uncommon prairie plants.” 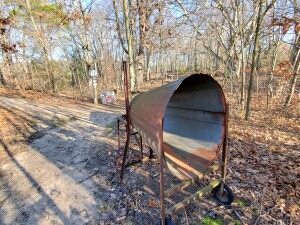 We first headed to a large sign in the parking lot that features a trail map as well as photos and text detailing the history of the area: “Central to the history of Stearns Creek Park is the story of the Vollmer family, residents of this site for over 100 years. Leopold Vollmer, an immigrant from Germany, married his wife Amelia in the United States in 1883. Soon after, in 1896, Leopold purchased a 40-acre plot including the location of this sign and throughout the following years accumulated adjacent property. The family’s very first mark on the landscape was to rip up the tree stumps left from the logging era, one by one, to clear the land for agriculture. Those stumps can still be seen lining the former family farm property. Construction of a home and barn was completed in 1912. There, Leopold and Amelia lived with their seven children. Their youngest son, Ludwig, was born in 1901, and purchased the property from other members of the family in his early 20s. He continued to live and work on the farm for his entire 87-year life. Ludwig, his first wife Ruth, and their eight children worked together to raise a variety of crops including apples, pears, strawberries, raspberries, quince, grapes, bean, cabbage, as well as corn, rye, and wheat. They had cows, horses, pigs, chickens, and dogs. In 1923, at 22 years old, Ludwig, his mother, and brothers, George and Henry, bought a pair of silver foxes and raised them for their valuable pelts. At the peak of their operation there were over 300 foxes on the property. Ludwig’s children recall an unforgettable memory: their father closing a $10,000 deal with a fur buyer from New York City in their family kitchen. Remnants of the fox pens can still be found in the park.” 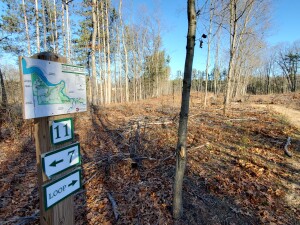 The trails are all very well signed and offer great views of the bayou, creek, and wetlands while also passing through ravines and past towering trees. Keep an eye out for two of the rare plants that can be found here: Eastern prickly pear cactus and frostweed. The trail is well-packed sand and dirt and with the exception of a few small hills should be relatively easy for all visitors to traverse. 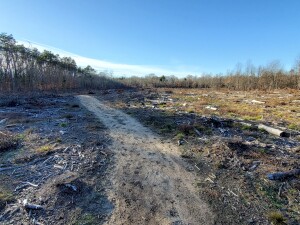 A sign near the trail that heads south from the parking lot highlights work being done to restore the rare oak savanna habitat. In a few years, what used to be rows of pine trees will have filled in with grasses and wildflowers. Oak savannas are rare in Michigan and preserving this one will be a great win for West Michigan.