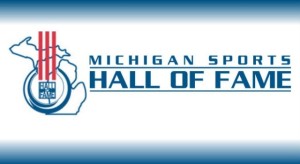 The 2015 Michigan Sports Hall of Fame class was:

This list is an amazing one and showcases the great talent to come from our state. It could have actually been better and more publicized with Derek Jeter and Mike Modano also at one point a part of the 2015 class. Modano had prior engagements and will be inducted in 2016. Jeter had problems with travel and missed the ceremony.

This was likely a disappointment for many attendees, but also showcases how strong already the 2016 induction ceremony will be. Jeter and Modano will likely join others and become the newest members of the Michigan Sports Hall of Fame.

This is exactly why Michigan needs to find a home for the plaques and showcase the talent in Michigan. The plaques previously were at the Cobo Center, before a renovation left the plaques homeless. Michigan really needs to figure this out, as these athletes are getting inducted into a homeless collection of plaques that could end up in a box.

Perhaps the new Red Wings arena, to open in 2017, could set aside some space for a Michigan Sports Hall of Fame. After all, the new arena will be located in close proximity to Ford Field and Comerica Park, putting three of the four professional sports teams in the state within close distance. Or perhaps one of the billionaires spending money on real estate in Detroit should donate some space to host the Michigan Sports Hall of Fame.

The induction ceremony took place at the MotorCity Casino Hotel in Detroit. The event has been held there for several years now. VIP tickets normally sell out. Adult individual attendance, which includes the dinner runs $125. General admission for the ceremony only runs $20.