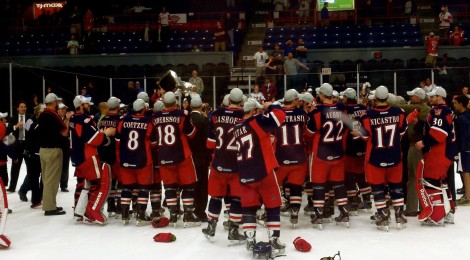 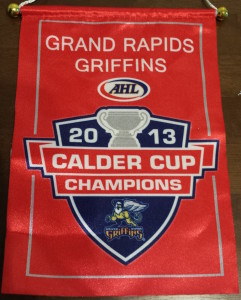 In 2013, I was fortunate to have the opportunity to travel to Syracuse, New York for Game 6 of the Calder Cup Finals and see the Grand Rapids Griffins win their first AHL championship. Four years later, the Griffins and Syracuse Crunch (top affiliate of the Tampa Bay Lightning) are meeting in the Calder Cup Finals again. Fan support has been strong for the Griffins (top affiliate of the Detroit Red Wings) this season, so tickets are sure to go fast. Games 1 and 2 will be held in Grand Rapids at Van Andel Arena on Friday, June 2 and Saturday, June 3. After that the series shifts to Syracuse for Games 3, 4 and 5 (if necessary) on June 7, 9 and 10. If the series continues on past that point, the Griffins would have a chance to win the Cup on home ice in Game 6 on June 13 or Game 7 on June 14. All games will be streamed online at ahllive.com (use code FINALS17), and Peppino’s Downtown Sports Lounge (130 Ionia Ave. SW) has hosted viewing parties for the away games throughout this year’s playoff run. On the radio, Bob Kaser will have the call of each game on ESPN 96.1 FM. If you have the chance to attend one or more of these games, I highly recommend it (especially if it’s a potential clinching game) – it’s an amazing experience! You can grab tickets at http://griffinshockey.com/, and remember that the $2 beer and $2 hot dog special (6-8 p.m.) runs through the end of the playoffs. After a disappointing NHL season for Detroit Red Wings fans, at least we can watch (or listen to) future Red Wings players as they try and be part of another Grand Rapids Griffins Calder Cup championship team!

The Griffins put together a great season with a record of 47-23-1-5 (100 pts., second in Central Division). In the playoffs they have knocked off the Milwaukee Admirals (3-0), Chicago Wolves (4-1), and the San Jose Barracuda (4-1). The Crunch had a regular season record of 38-24-7-7 and they have knocked off the St. John’s Ice Caps, Toronto Marlies, and the Providence Bruins. The Griffins offense is led by Matt Lorito (22 G, 56 pts.), Ben Street (25 G, 55 pts.), 2015 Red Wings 1st round pick Evgeny Svechnikov (20 G, 51 pts.) and Martin Frk (27 G, 50 pts.). Jared Coreau won 19 games during the regular season and has been great through three rounds of playoff action. The Crunch are led by Cory Conacher, Matt Taormina and Yanni Gourde. Veteran goaltender Mike McKenna has been solid during their playoff run.

Get pumped as the #Griffins get ready for the #CalderCup Finals by adding a Playoff frame to your profile picture! https://t.co/IuPm3SVsGu pic.twitter.com/TEBbIDC9NW

This should be an exciting series between two teams with a bit of history. The Griffins are loaded with talent and have been consistent all season long, while the Crunch have gotten hot at the perfect time. Expect Van Andel Arena to be rocking on Friday night and Saturday night as the fans hope to see their team get off to an early lead in the series. While we want to see the Griffins raise the Cup again no matter the number of games it takes, it sure would be something special to see them win it all on home ice!

*Some big names to watch for in the crowd: Red Wings GM Ken Holland and head coach Jeff Blashill, former players Kris Draper, Kirk Maltby and Jiri Fischer, as well as director of player development Shawn Horcoff; and for the Lightning: GM Steve Yzerman, Lightning Asst. GM Pat Verbeek, scout Jamie Pushor, director of player development Stacy Roest. You also never know when current Red Wings like Luke Glendening or Justin Abdelkader might be in the building to cheer on their former/future teammates.