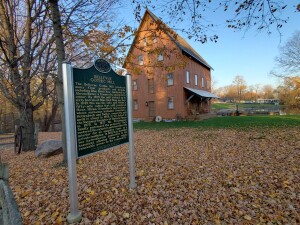 Bellevue is the oldest town in Eaton County and it is full of history. Lime mined here was used in the construction of our state capitol, and a few years ago local residents found mastodon bones while digging on their property. A drive through town reveals many gorgeous historic homes, and on a recent visit to the area we were able to visit the Bellevue Gothic Mill and a few other sites. The Michigan historical marker at the mill told us a lot about its history: 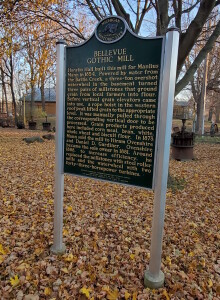 “Horatio Hall built this mill for Manlius Mann in 1854. Powered by water from the Battle Creek, a three-ton overshot waterwheel in the basement turned three pairs of millstones that ground grain from local farmers into flour. Before vertical grain elevators came into use, a rope hoist in the western roof peak lifted grain to the appropriate level. It was manually pulled through the corresponding vertical door to be processed. Grain products produced here included corn meal, bran, white whole wheat and biscuit flour. In 1873 Mann sold the mill to Hiram Ovenshire and Danial D. Gardiner. Ovenshire became the sole owner in 1881. Around 1888, to increase replaced the millstones with steel roller mills and the waterwheel with two forty-three-horsepower turbines.” 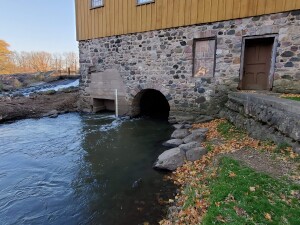 “The Bellevue Gothic Mill produced many flour products and brands, including Blue Bird flour, marketed by Abraham Butler, a former dry goods store owner. By 1929 the mill yielded up to sixty barrels of Blue Bird flour per day. In 1949 this was the only mill within a fifty-mile radius that still produced flour. Hiram Overshire’s descendants, whose surnames included Ovenshire, Hollenbeck and Butler, owned the mill until it closed in 1975. In 1977 the Stockhausen family purchased the property. They restored the exterior and renovated the interior for an adaptive reuse as a private residence. In 1982 they installed two hydroelectric generators in the basement, allowing them to supply renewable power to the community.” 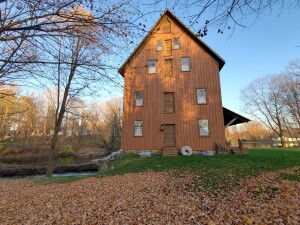