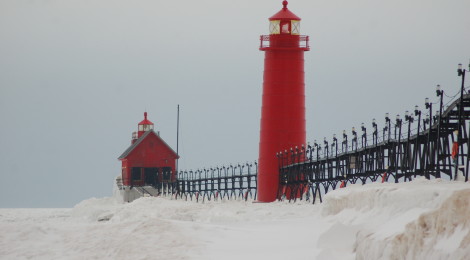 It’s that time of year again where photos of ice-covered lighthouses start making their way around the internet. Crashing waves and freezing cold temperatures create some truly spectacular sights along the Lake Michigan shore each winter, and with gas prices here among the lowest in the country there’s no reason not to check out places like South Haven, Holland, Grand Haven and Muskegon in the early months of 2015.

I had the chance to make the trip out to Grand Haven and Holland last winter, on an incredibly cold and windy day after significant snowfall. As you can see in the picture at the top of the post, the white background of the entire surrounding area really makes the red color of the lighthouses pop. This is an adventure that will require a nice heavy coat and some warm boots, and possibly some kind of additional traction control. The pier itself can be quite dangerous when icy, as you can see below:

Holland is another great spot to visit in the winter, and the road heading out to Holland State Park is usually in pretty good shape. Here’s a look at what the small lights at the north (green) and south (red) pier lights looked like last January:

And of course, the photo at the top of this post is the famous “Big Red” lighthouse, as you can see in the picture part of the channel had not frozen over, while the larger open area out in the lake appeared pretty solid with ice and snow cover. The breakwater was covered in snow but not too difficult to walk on, use caution on any surface that appears icy.

The small red light marking the entrance to the harbor is South Haven is another one that is fun to visit in the winter, I love how in the photo below it almost appears to be floating on an iceberg.