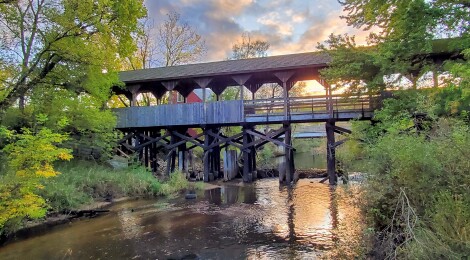 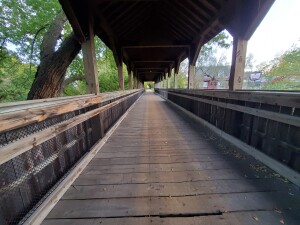 Covered bridges are popular landmarks for photographers in Michigan, and very few of them remain in good condition today. We’ve profiled many of these bridges, and were recently able to add the Reed City Covered Bridge to our list. This covered bridge is part of the White Pine Trail and has become one of the most iconic landmarks in Reed City. It is located near the intersection of Old U.S. 31 and Mackinaw Trail just north of downtown. 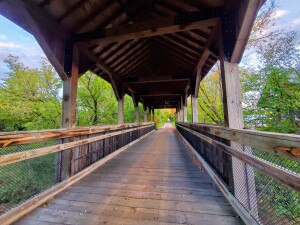 The Reed City Covered Bridge is 151 feet long and was built in 2000 on top of an old railroad truss bridge. A “Reed City” nameplate on the north end lets visitors know where they are, and on the bridge there are great views of the Hersey River as it flows underneath. 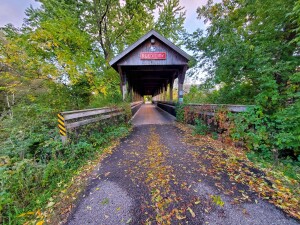 The bridges carries the White Pine Trail over the Hersey River. The trail is open to foot traffic, bicycles, and even snowmobiles in the winter. Stretching from just north of Grand Rapids all the way to Cadillac, the White Pine Trail is 92 miles long. The span from Big Rapids to Reed City is one of the longer paved sections, which helps it see plenty of traffic. This trail follows the old railroad path of the Grand Rapids and Indiana Railroad (North-South), while the Pere Marquette State Trail that also comes through Reed City follows a different railroad line for 30 miles (East-West). The Reed City Depot, located where the trails intersect, has been converted to a welcome center and has restrooms for trail users. It is part of the city’s Depot-Crossroads Park. 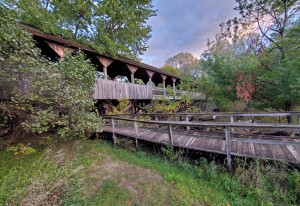 Be sure to check out the Little Mac Bridge a few blocks to the north. Check out our features on other covered bridges: Whites Bridge in Ionia County, Fallasburg Covered Bridge in Lowell, the Langley Covered Bridge, and the covered bridge on Pierce Stocking Scenic Drive in Sleeping Bear Dunes National Lakeshore.