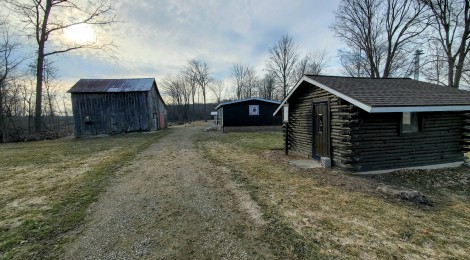 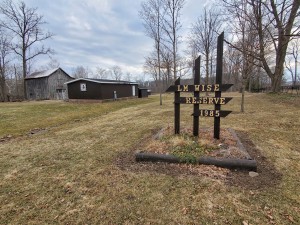 The first spring day of 2022 led us to exploring some new parks in Allegan County. Our favorite for the day was without question the L. M. Wise Preserve in Hopkins, an “outdoor classroom” that features historic buildings and beautiful trails just a short distance from U.S. 131. The property is managed by Hopkins Area Schools, and the public is welcome to explore its grounds from dawn to dusk daily. Today we will share some photos from our visit to showcase everything this great property has to offer. 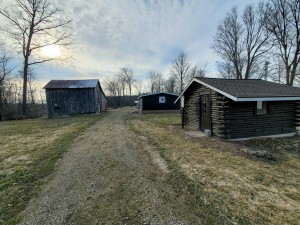 The parking area for the L.M. Wise Preserve is located on the west side of 15th St., about a half mile south of 128th St. You will immediately notice an old barn and the cabin. A plaque on the outside wall of the cabin shares the history of the former owners of this property and the early settling of Hopkins: “The early settlers, Jonathan Olin Round and Sally Congdon Round, carved out a farm in the dense old growth forest at this site. Jonathan first came to this area in the spring of 1837, the year Michigan became a state, and was impressed with the excellence of the land. He built a small log cabin here, and his family of four children and wife, Sally, joined him in 1838.Jonathan and Sally met and married in Rutland, Vermont. They moved to Leepart (Comstock area) where they purchased 114 acres of land. Three years later they sold that and moved to this site. the first year they cleared the land and planted crops in and amongst the stumps. In the years to come many did move into the area. The Round name is associated with the earliest efforts of the patriots in 1776 to establish freedom in the colonies. The grandparents of Jonathan Olin were George and Martha (Hopkins) Round. George participated in the Revolutionary War and Martha was a sister of Stephen Hopkins, one of the signers of the Declaration of Independence.” It goes on to talk about how the Wise family eventually became the owners of the property. 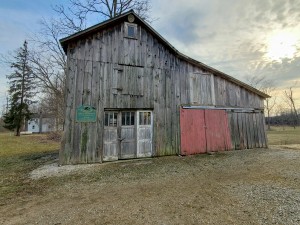 Near the barn there is a classroom building. Students are able to visit this preserve and learn about things like identifying trees and birds, as well as checking the quality of the soil and water. 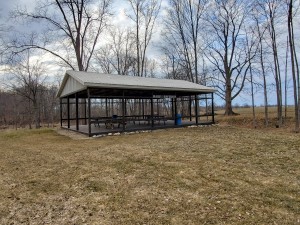 The trail passes by the Haef Pavilion, which offers some great views of the park and picnic tables. 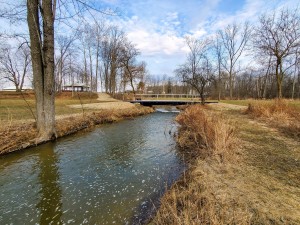 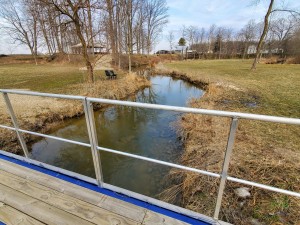 A bridge makes crossing Miller Creek easy, and you can choose to follow the path along the creek or head up the hill to the orchard path. 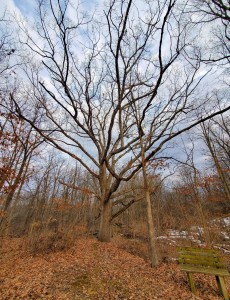 Up the hill and to the left a short trail leads to an oak tree that is more than 200 years old. A plaque here talks about the trees on the Wise property and some local folklore: “One of the favorite local stories concerns Emily Baker, one of fourteen children of Harvey and Catherine Baker, who lived just north of the Round property. At age six, Emily wandered off in the old growth forest by her home. She was lost for three days and two nights. They finally found her by the edge of Big Bear Swamp, a mile from present day Hopkins. She had taken shelter in the branches of a fallen old growth tree, When she was hungry she ate berries, probably huckleberries. She said she slept at night by the side of a log, and when her parents asked if she was cold she replied, “Oh, no, there was a big black dog (black bear) that came and slept by my side.” It is a story of a young pioneer’s resourcefulness needed to survive in the mid 1800’s.” 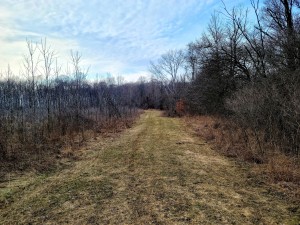 A grassy, wide trail leads through what used to be an apple orchard and then passes through the woods, where it borders a still-active farm (with cows!). Keep your eyes open for birds here, we were early enough in the season to not see many but we could hear sandhill cranes in the distance. Recent bird sightings on the property can be found at ebird.org. 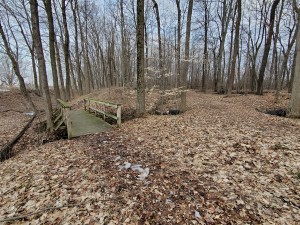 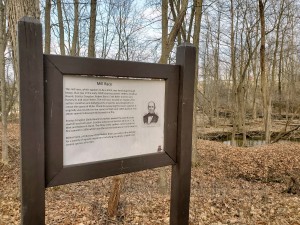 The trail continues through the woods and starts to work downhill, following the mill race that was constructed here by early settlers. This helped increase the speed of Miller Creek so it could power a sawmill, which was one of the earliest businesses in Hopkins (1850s). 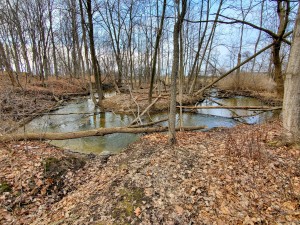 We can’t wait to visit the Wise Preserve in the spring to hopefully see some of the crayfish, turtles, frogs, muskrats, and other animals that find Miller Creek to be an ideal habitat. 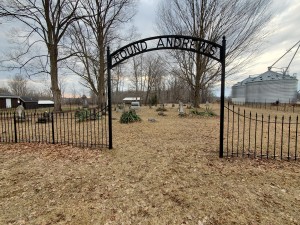 One other historical site at the preserve is the Round/Andrews Cemetery, the final resting place for many of the early residents of Hopkins. Many of the headstones are from the late 1800s and one of the men buried here is Civil War veteran Judson S. Tyrrell.