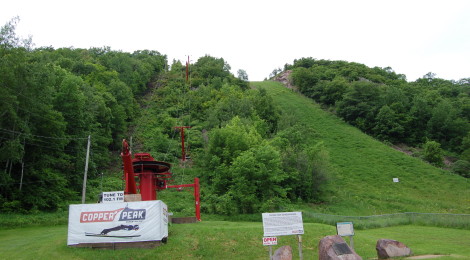 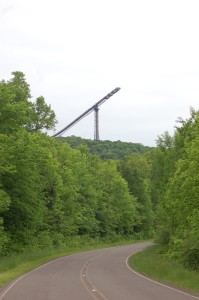 Copper Peak, the world’s largest ski flying hill, can be found off of CR-513 near Ironwood, Michigan. Ski flying is “a form of competitive Nordic skiing where athletes descend at very fast speeds along a specially built takeoff ramp using skis only; jump from the end of it with as much power as they can generate; then glide – or ‘fly’ – as far as possible down a steeply sloped hill; and ultimately land in a stable manner. Points are awarded for distance and stylistic merit by five judges, and events are sanctioned by the International Ski Federation.” This unique Michigan attraction is working toward hosting future skiing events after not being used for events since 1994. It is currently open in the summer and fall as the Copper Peak Adventure Ride, with stunning views that include three states and sometimes Canada from the top. 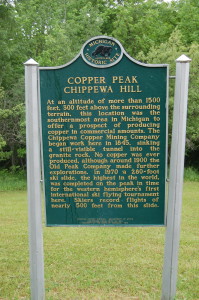 The Michigan historical marker at Copper Peak tells more about the hopes this area would be profitable for copper mining: “At an altitude of 1,500 feet, 300 feet above the surrounding terrain, this location was the southernmost area in Michigan to offer a prospect of producing copper in commercial amounts. The Chippewa Copper Mining Company began work here in 1845, sinking a still visible tunnel into the granite rock. No copper was ever produced, although around 1900 the Old Peak Company made further explorations. In 1970 a 280-foot ski slide, the highest in the world, was completed on the peak in time for the western hemisphere’s first international ski flying tournament here. Skiers record flights of nearly 500 feet from this slide.” 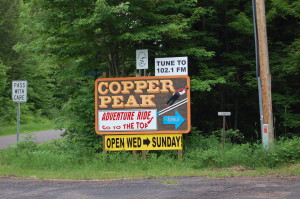 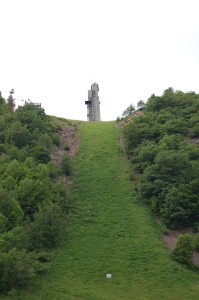 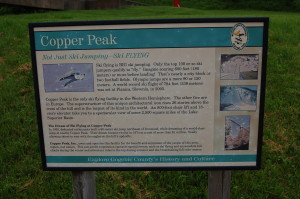 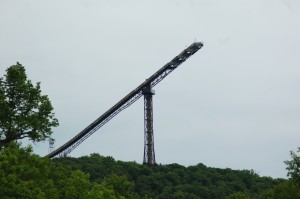 If you’re in the area to check out the Black River Scenic Byway and the five waterfalls on the Black River as it makes its way to Lake Superior, this is a great stop. Fall color from the top of Copper Peak is a truly breathtaking sight as well.