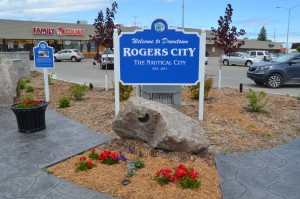 Rogers City is a small city (pop. 2,800) on Lake Huron today, but it was once a booming port. Today the city prides itself as “the Nautical City,” and a recent addition to the downtown landscape (at the corner of Third and Erie) shows off a few historical artifacts in a beautiful setting. The centerpiece of this new display area is the Calcite Light, which is placed next to some informational plaques and a ship’s wheel.

“For many decades the Calcite Light greeted ships entering the harbor at Rogers City’s Port of Calcite, the world’s largest limestone quarry. Although the early history of this light is unknown, when it was manufactured in the early 1900s it was powered by acetylene and a sun valve turned it on at night and off during the day. Sometime after Calcite’s breakwater was finished in 1929, the light was converted to electricity and relocated to the tower at the end of the breakwater. It remained there until it was removed from service in 2015 and donated to the city by quarry owner Carmeuse Lime & Stone. The light was restored by local volunteers and placed here for all to see.” 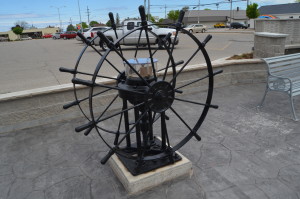 Next to the Calcite Light display is a ship’s emergency steering wheel. “An emergency steering wheel like this would have been found on steam-powered freighters operated by the Rogers City-based Bradley Transportation Line, which carried limestone from the Port of Calcite to locations throughout the Great Lakes from 1912-2000. This wheel, on loan to the City of Rogers City from the Capt. Paul and Marilyn Stone family, was located on the stern of the ship and for use if the primary steering wheel in the pilothouse became inoperable.”

Rogers City has many historical plaques spread throughout town, in parks and in front of historic buildings. A few miles away you’ll find the 40 Mile Point Lighthouse, which is open as a museum. You can view the Calcite freighter loading area or the World’s Largest Limestone Quarry from viewing areas in Rogers City as well.