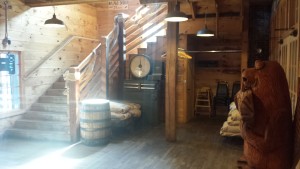 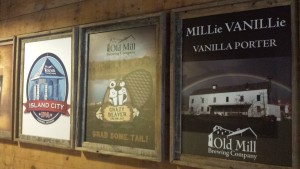 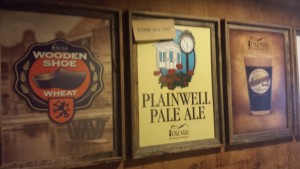 A high school soccer game brought us to Plainwell a little while ago, and we made sure to head down nice and early so we would have a chance to check out Old Mill Brewpub & Grill before the game. We found a great selection of beers, friendly staff and patrons, delicious food and a beautifully restored historic building. The “old mill” here dates back to the 1870s, and at one point was the largest buckwheat flour mill in the entire country. Care was taken in restoring this building for its current use, making wood building materials a focus of the restaurant, viewable brewing area, and upstairs banquet facility. 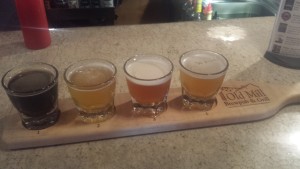 There were nine beers on tap and we ordered a flight so we could try all of them. We led off with the Sunshine Stout, which was a delicious blend of coffee and chocolate and one of the smoothest stouts we had tried an awhile. The Crazy Beaver Cream Ale, Wooden Shoe Wheat and Plainwell Pale Ale were all pretty solid, and I especially enjoyed the Island City IPA. Old Mill showed that they have an understanding of several other styles, as the Buckwheat Brown Ale, Millie Vanillie Vanilla Porter and Free Love (fruit beer) also impressed. We finished things off with Wilbur, a Double IPA that was flavorful and well-balanced while also presenting a 9.3% ABV. The Sunshine Stout was our choice to take home in a growler, but on a return trip we’d be happy to take any one of these beers home. 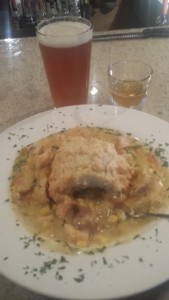 Old Mill offers a full menu, with appetizer, soups and salads, and entrees. We split the special of the day, which was chicken & dumplings. One plate of this was enough for both of us, and it definitely tasted like a meal made by family vs. the usual reheated fare found elsewhere. 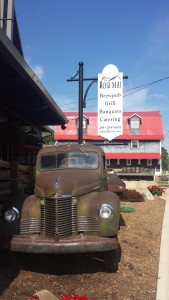 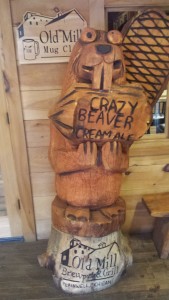 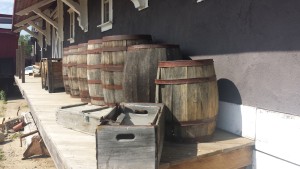 The full combination of great beer, great food and a historic building that has been restored in beautiful fashion helped make this a stop we’ll remember for quite some time. Old Mill is located at 717 E. Bridge St. in Plainwell, about a half hour away from Kalamazoo and 30-45 minutes south of Grand Rapids.