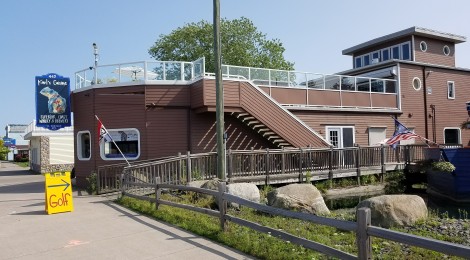 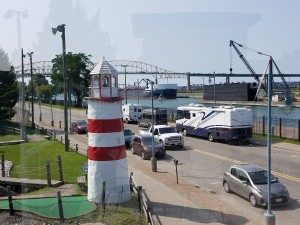 I love visiting Sault Ste. Marie, Michigan and one of my favorite activities while there is watching Great Lakes freighters as they travel to and from the Soo Locks. When we learned there was a local restaurant with a patio dining area that offered great views of passing freighters, we knew we had to check it out. As it turns out, Karl’s Cuisine and Superior Coast Winery & Brewery delivered on the promised views while also serving delicious food and locally made beer. 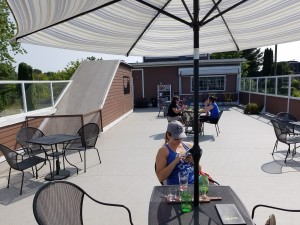 Karl’s Cuisine is located on West Portage Ave., across the street from the Soo Locks near the west end of the downtown shopping and dining district. The restaurant was mildly busy when we visited around lunchtime on a Friday and we were lucky to be able to snag one of the last tables on the upstairs patio. 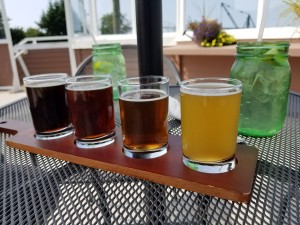 While we looked over the food menu, we ordered a flight of Superior Boast Winery & Brewery beers. The Hodcarrier Stout, Poe Lock Brown, Slugger O’Toole’s Irish Red, and Booberry Wheat were all decent and refreshing beers. Many of this brewery’s beverages pay homage to local people and landmarks while covering the basic styles as well as seasonal options. We also tried and enjoyed the Blackberry Hard Cider. 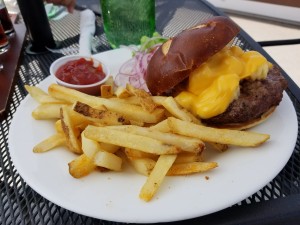 For food, we went with the first thing on the menu that caught our attention – the Donkey Kong Burger. “Just like its namesake, it throws barrels of flavors and captures your tastebuds like a damsel in distress. Top our fresh hamburger with homemade macaroni & cheese and Donkey sauce.” Served with a side of fries, this was the perfect filling meal after a long day of traveling and sightseeing. 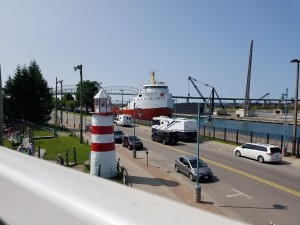 While dining at Karl’s we were able to see two different freighters make their way into the locks: Frontenac, a 729 foot Canada Steamship Lines vessel and Algoma Strongfield, a 741 foot long Equinox class ship that is part of Algoma Central Corporation’s fleet – in its first year of operation on the Great Lakes (A third vessel was making its way towards the locks as we finished our meal). The views here were just as great as advertised – there is something special about being able to watch such large vessels from a few hundred feet away while enjoying a meal. 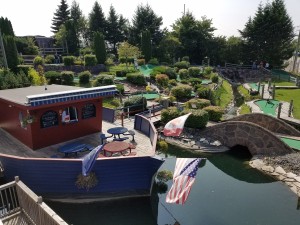 Next door to the restaurant there is a mini golf course, which is a great spot to stop before or after a meal. While we were there several families were watching their kids golf while they took in food and a few drinks from the rooftop patio.