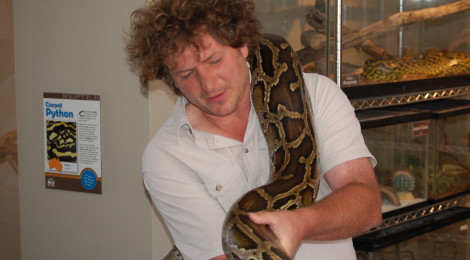 Anyone from the West Michigan area who has tuned in to catch A&E’s new reality series Wild Transport the past two weeks might have recognized a familiar face. The show’s lead is none other than Rick de Ridder, better known as Rick the Reptile Guy. Rick was a big part of helping open Boulder Ridge Wild Animal Park in Alto, and should be pretty recognizable to anyone who visited in its early years of operation. He was also a regular fixture at birthday parties, schools, TV and radio morning shows and even appeared at a West Michigan Whitecaps game with some of his animal friends.

We were lucky enough to meet Rick on one of our visits to Boulder Ridge, and it was quickly evident that he has an amazing knowledge of animals as well as the perfect personality for his job. It’s no surprise that he has gone on to find success in front of the camera, as he partners with three other cast members on Wild Transport to help move animals of all sizes from place to place.

Wild Transport airs Tuesday nights at 10PM/9PMC on A&E. Four episodes have already aired: “Camel Tow,” “Crouching Tiger, Hidden Cobra,” “Chimp My Ride” and “Zedonk-ulous.” If you were a fan of Rick’s work in the Grand Rapids are, now’s your chance to catch up on what he’s up to in Florida.

Above is a video of Rick helping show off the African Crested Porcupine at Boulder Ridge. As you can see, he has never been afraid to get up close with animals so that others can enjoy them:

The first part of the second video below shows Rick treating some ladies from a senior center to an up-close encounter with one of the large snakes at Boulder Ridge.