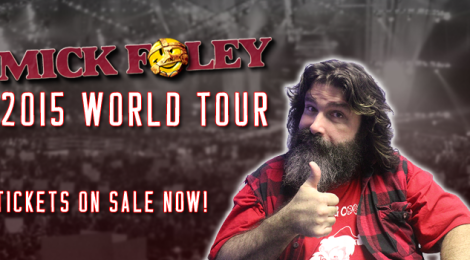 Anyone who has been a fan of wrestling over the year knows the name Mick Foley, or perhaps the countless nicknames or alternative characters he went by. The WWE (that’s World Wrestling Entertainment for you non wrestling fans) Hall of Famer was known as “The Hardcore Legend” and had alternative characters of Cactus Jack, Mankind, and Dude Love. After retiring from the wrestling world, the fan favorite Foley has begun a career that centers around acting and comedy. During the month of January, Foley brings his stand up to Michigan with two shows in Royal Oak and Grand Rapids.

Mick Foley will be in Michigan for his “2015 World Tour” with stops at Dr. Grin’s (Grand Rapids) on January 20th and Mark Ridley’s Comedy Castle (Royal Oak) on January 21st. The summary for the show reads, “WWE Hall of Famer and New York Times best-selling author, Mick Foley, is one of pro wrestling’s greatest storytellers and now you can catch his acclaimed live show”.

Foley was a three time WWE Champion and always a fan favorite for his outlandish stunts. He became a best selling writer with his memoir “Have a Nice Day”. It was the year 2012 that saw Foley break out in a career in comedy for his second life. Foley did standup at the Just for Laughs festival in Montreal and the Edinburgh Fringe Fest, two of the world’s largest comedy festivals. After rave reviews, Foley has now toured the world for the past two years. It’s worth noting here that Foley was on the high school wrestling team with fellow comic Kevin James. Perhaps that’s what inspired him to get into comedy.

For those who can’t catch the live standup, catch Mick Foley’s latest with “I am Santa Claus”, a documentary focusing on the lives of five real life Santas and how they live the entire year. This movie has received good reviews, but also comes with some controversy. One of the five Santas is gay and this sparked some social media protests for the movie. Foley is passionate about Christmas and even has one room in his house dedicated to his favorite holiday. He also played the jolly St. Nick character in an episode of “New Girl”. Foley produced the movie with Morgan Spurlock, best known for his fast food critique “Super Size Me”.

I have had the pleasure to attend comedy events at both of these locations. Dr. Grin’s is located downtown Grand Rapids in the B.O.B. This location continues to get some of the biggest names in comedy. Mark Ridley’s Comedy Castle opened in 1979 and helped launch the careers of comedians Tim Allen and Dave Coulier, who got their starts during open mic nights.

Buy This at Allposters.com

Buy This at Allposters.com

Mankind Posed
Buy This at Allposters.com