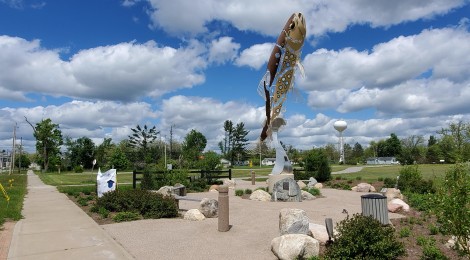 Michigan is home to many of the world’s largest and longest things, one of which is the World’s Largest Brown Trout Sculpture in Baldwin. A four-season paradise for the outdoor adventure lover, Baldwin is a popular destination in Lake County for snowmobiling, fishing, hunting, hiking, ORV trails, and more. The brown trout sculpture is a fairly recent addition to the downtown landscape, having been added to a small park next to a rail trail in 2018. 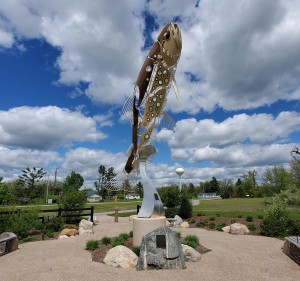 The brown trout sculpture was sculpted by Ivan Iler of St. John’s, Michigan. It is 25 feet tall and is 8 feet wide at its widest point. Iler’s website states “As a Michigan based artist who specializes in metal fabrication, I am particularly interested in outdoor public art. The idea that people will see and interact with my work long after I’m gone inspires me more than anything else. I have many irons in the fire in terms of the mediums I use, sometimes even literally iron in the fire. Sculpting, carving, engraving, metal fabrication, (including blacksmith) painting, leather smith, drafting and mechanical design to name a few, as well as my daily work as a motorcycle engineer and fabricator at my small shop in St Johns Michigan, Hammer In Hand Custom Cycles.” (http://www.ivaniler.com/) 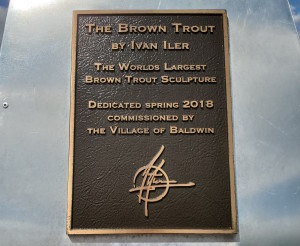 The Pere Marquette State Trail begins here and runs for 30 miles through Lake, Osceola, and Clare counties following an old railroad line. It is paved in sections and is crushed stone in others, making it a popular trail for bicycling, snowmobiling, hiking, and more. Baldwin celebrates its connection to this fish each summer with Troutarama, a weekend festival featuring entertainment, fishing tournaments, food booths, and a grand parade. 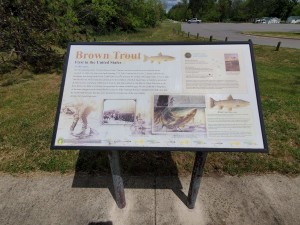 A plaque near the Pere Marquette State Trail gives the background history of Baldwin’s connection brown trout and how it came to be known as a top spot in the state for fishing. “The first planting of the “German Brown Trout” (Salmo trutta) occurred from this railroad trestle on April 11, 1884. On that crisp April morning, U.S. Fish Commission Car No. 2, based at Northville, Michigan, was being loaded with 75,000 lake trout fry destined for northern Michigan lakes. It was a light load for this car, which typically carried up to three million whitefish fingerlings, so hatchery personnel decided to also send about 5,000 brown trout fry that had hatched in mid-March. These fish were a gift from Baron von Behr in Germany in repayment for some whitefish eggs. No one could have imagined, as the train chugged north toward Baldwin, that the little “German Browns” dumped from milk cans into the Baldwin River later that day were destined to become one of the most highly prized of all American trout.” 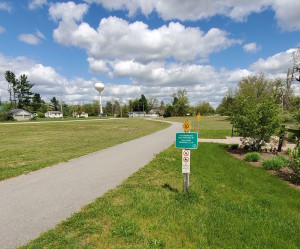 The World’s Largest Brown Trout Sculpture can be found on the east side on M-37 between 8th St. and 9th St. Another Michigan town with a great fish sculpture is Kalkaska, home to the National Trout Memorial and fountain.