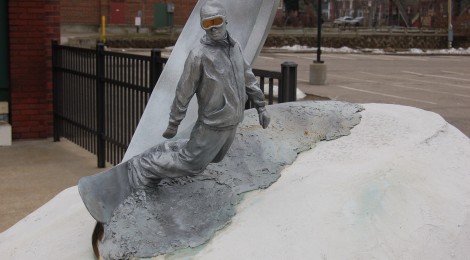 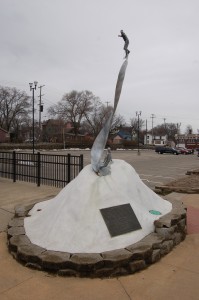 Before there was snowboarding there was snurfing, a winter hybrid of skiing and surfing that traces its roots to Muskegon, Michigan. In 2012, a snurfer statue commemorating this part of Muskegon’s winter sports history was placed at 477 W. Western Ave., downtown across the street from L.C. Walker Arena. “The Turning Point” was sculpted by Jason Dreweck and Teresa Hansen, and it stands 14 feet tall. It depicts a female snurfer at the top and a modern day snowboarder at the bottom. 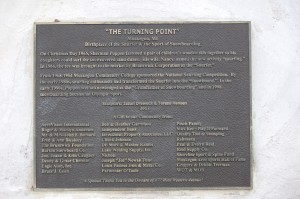 The plaque next to the statue gives more historical details: “On Christmas Day 1965, Sherman Poppen fastened a pair of children’s wooden skis together so his daughters could surf snowcovered sand dunes. His wife, Nancy, named the new activity “snurfing.” In 1966, the toy was brought to the market by the Brunwick Corporation as the “Snurfer.” From 1968-1984 Muskegon Community College sponsored the National Snurfing Competition. By the early 1980s, snurfing enthusiasts had transformed the Snurfer into the “Snowboard.” In the early 1990s, Poppen was acknowledged as the “Grandfather of Snowboarding,” and in 1998 snowboarding became an Olympic sport.” 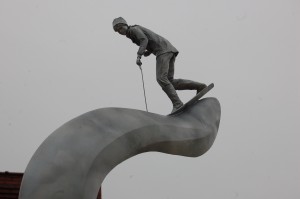 Winter sports have always been popular in Michigan, thanks in large part to the heavy amount of lake effect snow that falls each winter. The Muskegon State Park Winter Sports Complex is home to one of three luge tracks in the United States, and the U.S. Ski and Snowboard Hall of Fame can be found in Ishpeming in the Upper Peninsula.

Check out other Muskegon articles:

16 Things to See and Do in Muskegon, MI