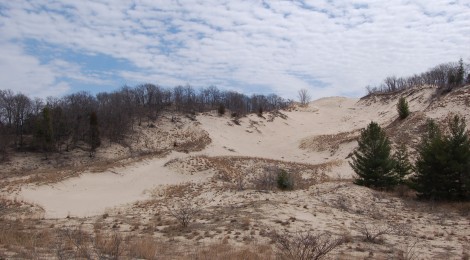 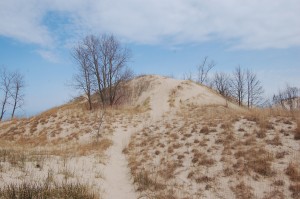 Michigan is home to a handful of state parks on its Lake Michigan shoreline that showcase beautiful sand dunes: Holland State Park, Van Buren State Park, Saugatuck Dunes State Park, Muskegon State Park, and Grand Mere State Park. Each of these parks is spectacular in its own way but when it comes to dunes at a state park in Michigan, Warren Dunes State Park in the state’s southwestern corner is as good as it gets. This state park features almost 2,000 acres of land, six miles of trails, towering dunes that rise more than 200 feet above the lake, and more than 200 campsites (modern, semi-modern, camper cabins). Named dunes in the park include Tower Hill, Pikes Peak, Mt. Fuller, Mt. Randal, and Mt. Edward. This park and nearby Warren Woods State Park were made possible by the conservation efforts of local businessman Edward Warren. Some of the dunes can be seen and easily reached from the beach parking lot, while Mt. Randal is accessed from a trail that starts at the day use parking area near the campground. There’s more than enough parking, and enough sandy beach and warm swimming water for everyone even on the busiest of summer days. We hiked more than five miles of trails and dunes and saw many birds, a beaver, and a coyote as well as many promising signs of spring. 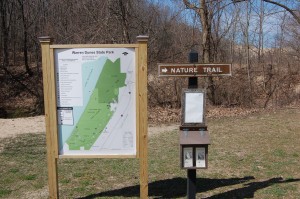 This is one of Michigan’s busiest and most-visited state parks in the summer, and its campground frequently shows up on “best of” lists. We recently visited Warren Dunes State Park, and today we’ll share some of our favorite photos – this is definitely somewhere you’ll want to visit soon! The physical address for Warren Dunes State Park is 12032 Red Arrow Highway, Sawyer, MI, and it can be reached by taking exit 16 from I-94.