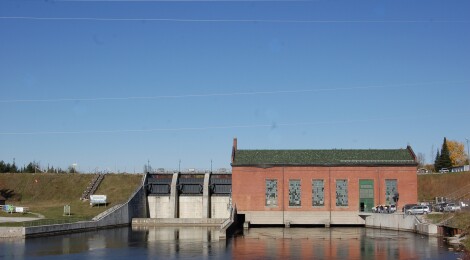 There are many historic dams in Michigan that were built during the early 1900s to harness the hydroelectric power of rivers like the Muskegon River, Au Sable River, Grand River, and St. Mary’s River. We always like to visit these sites and see the work that went into crafting these large buildings and structures in a way that they are still structurally sound today. The Five Channels Dam on the Au Sable River near Oscoda is one of several Consumers Energy hydroelectric plants in the area, and has a bit of unique history for the way it treated workers during construction. From Consumers Energy: “It is an early American example of incorporating worker safety and health provisions into construction site living, drawing heavily on lessons learned in the building of the Panama Canal.” This plant is capable of producing 6,000 kilowatts. 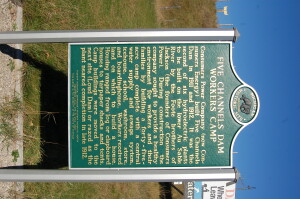 The Michigan historical marker next to the dam provides some of its backstory: “Consumers Power Company (now Consumers Energy) built Five Channels Dam in 1911 and 1912. It was the second of six hydroelectric plants to be built on the lower Au Sable River by the Foote brothers of Jackson (founders of Consumers Power). During construction the company sought to provide a healthy environment for workers and their families by building a forty-five-acre camp complete with a central water supply and sewage system, icehouse, school, washroom, store and boardinghouse. Workers received land on which to build a house. Housing ranged from log or clapboard to tarpaper shacks and tents. Camp buildings were moved to the next site (Loud Dam) or razed as the plant neared completion in late 1912.” 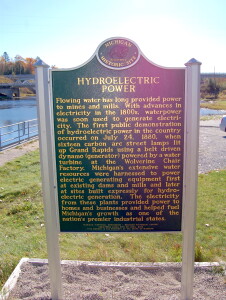 The other side of the historical marker, titled Hydroelectric Power, reads: “Flowing water has long provided power to mines and mills. With advances in electricity in the 1880s, waterpower was soon used to generate electricity. The first public demonstration of hydroelectric power in the country occurred on July 24, 1880, when sixteen carbon arc street lamps lit up Grand Rapids using a belt driven dynamo (generator) powered by a water turbine at the Wolverine Chair Factory. Michigan’s extensive water resources were harnessed to power electric generating equipment, first at existing dams and mills and later at sites built expressly for hydroelectric generation. The electricity from these plants provided power for homes and businesses and helped fuel Michigan’s growth as one of the nation’s premier industrial states.” We are thankful that Consumers Energy has chosen to preserve these sites while honoring their history. 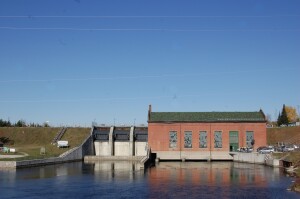