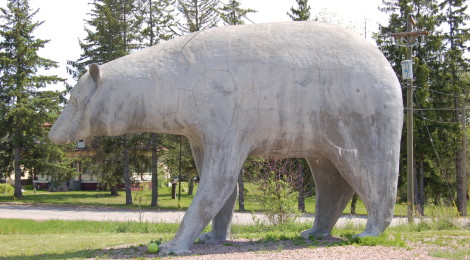 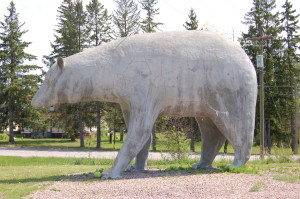 Vulcan is a small unincorporated community in Dickinson County in the Upper Peninsula, and is best known as the home of the Iron Mountain Iron Mine. Open for tours, this mine still draws thousands of visitors each year to come and experience what the mine was like more than a century ago.

From the mine’s website: “In 1956 three Iron Mountain businessmen, Eugene Carollo, Albert Carollo, and James Goulette had an idea for an attraction that would give people a view of iron mining as it once existed.  On the site of the East Vulcan mine Eugene Carollo re-discovered an exploratory tunnel, which had not been used since the late 1800’s. Two buildings were constructed; one an admissions’ building and gift shop; the other, a museum featuring miner’s equipment and mining tools and machinery.  Visitors were greeted in the parking lot by BIG JOHN; a giant replica of a underground miner that stands 40 feet high, 12 feet wide and weighing 2000 pounds.  On dark and gloomy days, the beam from Big John’s mine latern will catch your eye.  The attraction was called the “Iron Mountain Iron Mine”.    Walking tours began in 1958.  The train that you ride on today was added in 1965.”

Across the road from the mine on the side of US-2 is another impressive attraction: a concrete bear statue that is 28 feet long and 17 feet tall. There is little information nearby about the significance of this bear created by John Radlovitz, but it makes an excellent place to stop and take some pictures.