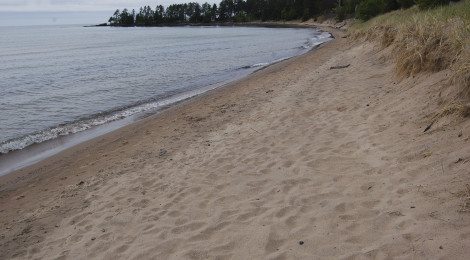 The Keweenaw Peninsula was once home to hundreds of thousands of residents and workers, as mining dominated and made the area incredibly prosperous. In modern times, this incredibly beautiful part of the Mitten State relies heavily on tourism as visitors come north for solitude, historical sites and natural formations near Lake Superior. The drive on M-26 from Eagle River to Eagle Harbor is an especially beautiful stretch, and features the stunning beach and dunes of Great Sand Bay. 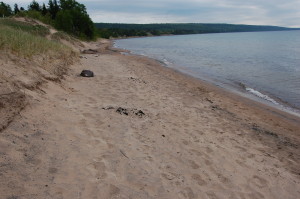 This is a great spot for a rest, and thank to recent improvements there is a large parking lot with restrooms. We featured this as one of our 12 Breathtaking Beaches on Lake Superior due to its relatively warm waters for swimming and an abundance of sand that is lacking in most Keweenaw locations. 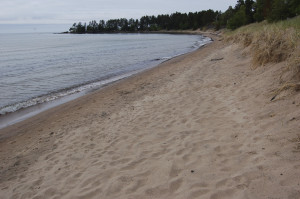 A sign at the top of the bluff shows a map of the area and features the following text:

“Lake Superior was discovered in 1629 by the French explorer Brule. Largest expanse of fresh water in the world. The water of Lake Superior is chemically pure. Area: 31,800 sq. miles; 1500 miles of coast; greatest length, 350 miles; greatest breadth 160 miles; greatest depth 1,333 feet; 602 feet above sea level; about 21 feet above Lake Huron. The first steamer on Lake Superior was the Independence in 1845. The Independence came from Chicago. As there was no canal or locks at the Soo at that time it had to be portaged around the rapids. The freighters you see passing this point carry more tonnage each season than the combined tonnage of the Panama, Kiel and Suez Canals.” 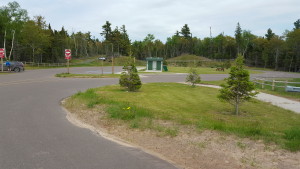