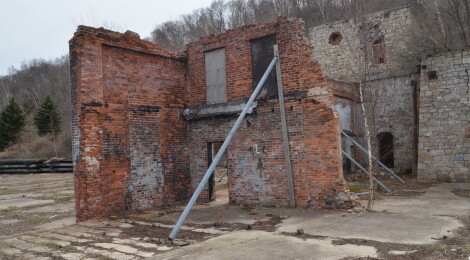 Frankfort is well known for being a Lake Michigan beach town with plenty of sand and a vibrant downtown. Thousands visit the area each year to see the Frankfort Breakwater Lighthouse, grab a beer at Stormcloud Brewing, or shop and dine along Main St. We recently visited the ruins of the Frankfort Iron Works, which was one of the first industrial sites in the area. It is easy to visit this site and learn more about it’s history, since the ruins are located in Elberta’s Waterfront Park on the other side of Betsie Lake. The park offers a playground, basketball courts, a paved walking path, and several historical plaques that teach visitors about the Frankfort Iron Works, early car ferries that operated in the area, the U.S. Life Saving Station, and early Frankfort.

One of the historical signs in the park talks about the early construction of the harbor to allow merchant ships access to the lake. “The creation of the harbor allowed larger crafts access to the timber that was processed by the area’s mills and was essential in drawing the attention of James M. Ashley, who sought a launching point for Ann Arbor Railroad car ferries to points west.” That same sign is where we learn the history of the Frankfort Iron Works: “The first blast furnace of the Frankfort Ironworks fired up in South Frankfort on July 1, 1870. It had 22 kilns to provide charcoal as fuel for the furnace. The iron ore and limestone used for smelting was shipped in from Escanaba. Men worked 12-hour shifts and peak production was 40 tons of pig iron a day, destined for Detroit and Buffalo. In 1883 the ironworks ceased operation as more efficient methods of iron smelting were invented.” 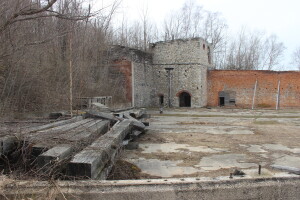 Visitors to this site can learn about why the Frankfort Iron Works had such a short life, but also how it led to new developments that benefited everyone that lived in town: “Fuel was a limiting factor for iron production; the furnace required up to 15,000 cords of hardwood a year. The longer the furnace was in operation, the farther the hardwood had to travel to the charcoal kilns as local supplies diminished. Management tasked the Blacklock Machine shop to build a steam locomotive to haul wood to the ironworks. The narrow gauge railroad provided transportation for hay, farm supplies, and courageous passengers in addition to the wood for the ironworks. This was the first steam-powered railroad in Benzie County.” 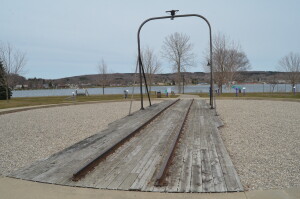 After the Frankfort Iron Works shut down, it wasn’t long before another industry started up. Car ferries allowed the railroads to transport goods across Lake Michigan, and Elberta soon became a hub of activity. “The Ann Arbor Railroad Car Ferry service started on November 16, 1892, when the Ann Arbor No. 1 arrived at Frankfort on her maiden trip. Car ferries traveled to Kewaunee, Wisconsin (65 miles); Menominee, Michigan (80 miles); Gladstone, Michigan (98 miles); Manitowoc, Wisconsin (80 miles); and Manistique, Michigan (90 miles).” Part of the railroad track has been preserved as part of the park. 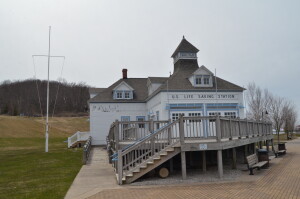 One of the other things you’ll see at this park is the old U.S. Life Saving Station. Before the Coast Guard, the USLSS was around to help rescue mariners from shipwrecks. “The U.S. Life Saving Station was built in 1887 in present-day Elberta, on the south side of the channel to Lake Betsie. The U.S. Life-Saving Service was created in 1878 and merged with the Revenue Cutter Service in 1915 to form the U.S. Coast Guard. The Coast Guard station moved to a new building on the north side of the channel in 1935. The Ann Arbor Railroad acquired the Elberta Life Saving Station and used the building as its Marine and Yard Office from 1936 until the railroad ceased operation, in 1976.” 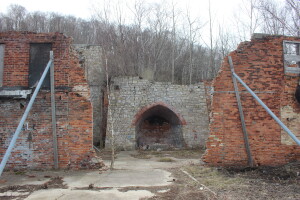 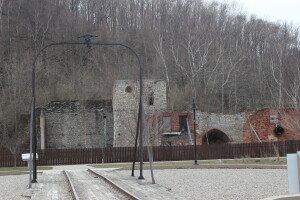 The ruins of the Frankfort Iron Works are easy to view, but they are protected behind a fence. Please respect these carefully preserved remnants of the past by observing all posted signs. It is possible to view the Frankfort Breakwater Lighthouse from this park as well, though better views and the path out to the lighthouse start over in Frankfort at Frankfort Public Beach.