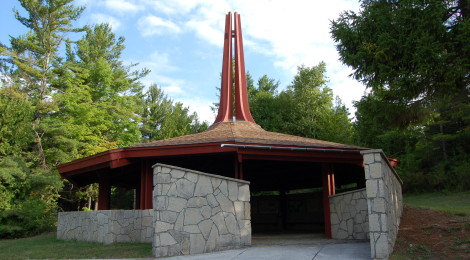 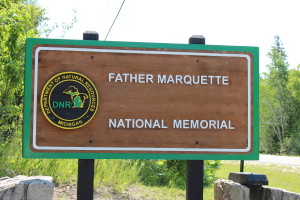 French missionary and explorer Jacques Marquette had a big hand in founding and developing two of the most important cities in the Eastern Upper Peninsula of Michigan (St. Ignace and Sault Ste. Marie), and the Father Marquette National Memorial in St. Ignace pays tribute to his life and legacy. The site is managed by Straits State Park and can be found on the west side of I-75 just north of the Mackinac Bridge. The memorial includes an open-concept wooden structure with informational kiosks, an interpretive nature trail, viewing platforms with views of the Mackinac Bridge and a large open area for demonstrations as well as an outdoor amphitheater. A museum here burned down in 2000. 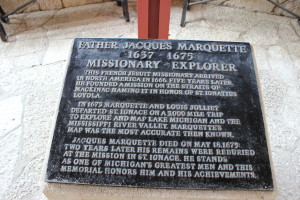 Marquette founded a mission at Sault Ste. Marie in 1668 and one in St. Ignace in 1671 before moving on to Wisconsin. He then explored water routes on the Mississipi River and was on his way back to St. Ignace in 1674 when he died of dysentery near Ludington, Michigan. Today his name is well known by many in Michigan, as his name can be found as an Upper Peninsula county and city, the Pere Marquette River in the Lower Peninsula, the former Pere Marquette Railway, Pere Marquette State Forest and Pere Marquette Beach (Muskegon). Various tributes and statues can also be found around the state, and his bones are said to be interred on the grounds of the Ojibwa Indian Museum in downtown St. Ignace. 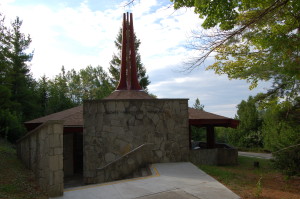 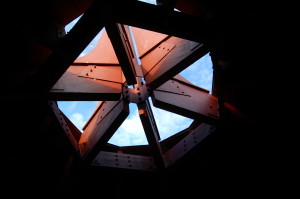 The National Memorial site centers around an open-concept structure that features a map of Marquette’s travels painted on the floor and several informative displays on the walls. You can also press a button on the wall and hear “Father Marquette” tell you of his travels and encounters with the native peoples. 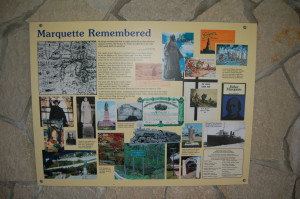 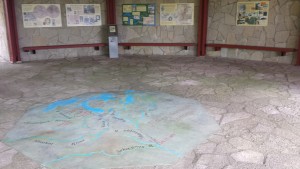 A nature trail winds through the site, and plaques detail each kind of tree found along the way as well as give insight into what life was like here for the native peoples and early settlers. This smooth, fairly level path also passes by several overlooks that provide views of the Mackinac Bridge. 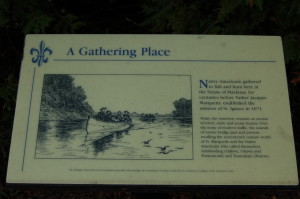 This is a great stop for anyone interested in Michigan history, or it can make for a great place to get out and stretch your legs after crossing the Mackinac Bridge. The Father Marquette National Memorial is open daily from 8 a.m. to 10 p.m., April to November. It is located at 592 Boulevard Dr., west of I-75 and south of US-2. While a MI recreation passport is required for entry to Straits and all other state parks, entry to this national memorial is free. 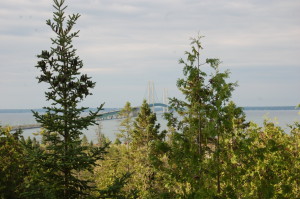