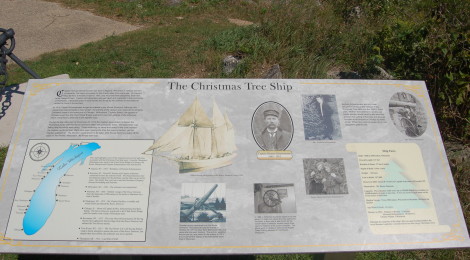 On a recent trip to the Upper Peninsula, my hobby of tracking down Michigan Historical Markers led me to Thompson, just east of Manistique, and a marker remembering Michigan’s connection to the Rouse Simmons, known as the “Christmas Tree Ship.”

The two-sided marker first focuses on Thompson, which was a booming lumber town in the early 1900s. Its proximity to stagecoach routes and the railroad helped its short-live boom, as did nearby attractions like Kitch-iti-kipi, the “Big Spring.”

The Delta Lumber Company of Detroit, headed by E.L. Thompson, platted the village of Thompson in 1888. Seven different lumber companies ran the mill in the village. By 1907 the population had reached 900. Three churches and four saloons served the residents, as did a general store, a hotel, and a hospital. Stagecoaches carried passengers twice daily to nearby Manistique, located along the Minneapolis, St. Paul and Sault Ste. Marie Railway. The Thompson Railroad, used primarily for hauling logs to the docks, also took tours to the Big Spring, Kitchi-ti-ki-pi.Lumbering activities in Thompson died out quickly, and by 1919 the town’s population had dropped to only 150. Thompson was the last port of call for the “Christmas Tree Ship,” Rouse Simmons, which sank in 1912.

The other side of the marker tells how this was the last port of call for the Rouse Simmons, which was loaded with a cargo of Christmas trees when a winter storm sank it off the Wisconsin coast. The wreck was found in Lake Michigan in 1971.

The Rouse Simmons was one of the last schooners on the Great Lakes. Built in 1868 to carry lumber, the three-masted vessel became Chicago’s “Christmas Tree Ship” when Herman Schuenemann purchased an interest in it in 1910 Around 1876 the Schuenemanns had begun transporting trees from northern Michigan and Wisconsin to Chicago. In November 1898 Herman’s brother August perished in the wreck of the Schooner S. Thal, but Herman continued in the business. Bound for Chicago on November 22, 1912, he boarded the Simmons which was loaded with trees from Thompson’s forests, and sailed into a fierce snowstorm that plunged the ship and its crew and passengers, to the lake bottom. Herman’s wife and daughters delivered trees to Chicago each Christmas until around 1934.

There are several other full-color informational plaques (photo above), detailing the ship’s history as well as the background of the Schuenemann family. Captain Schuenemann’s widow and daughter kept the Christmas tree tradition alive for many years after the ship was lost.

In recent years, the US Coast Guard cutter Mackinaw has been loaded with a cargo of trees and makes its way to Chicago, where a historical group has been re-enacting the Simmons‘ delivery for 12 years.

I really enjoy finding the hidden gems like this in Michigan, and this one hit home for two of my hobbies – historical markers and Great Lakes shipping! This park overlooks Lake Michigan, and if you’re in the area I recommend a quick stop at the Manistique East Breakwater Light as well.