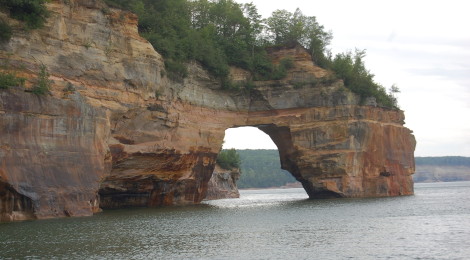 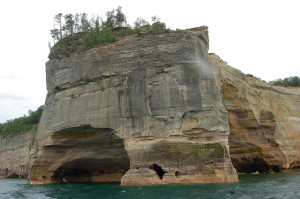 The scenery along the Pictured Rocks National Lakeshore is stunning – with colorful layered rock cliffs, unique rock formations, abundant waterfalls and a treasure trove of historical sites and information. In the summer of 2010 I had the chance to experience these sights from the Pictured Rocks Boat Cruise and was very impressed with the trip. I had been to Pictured Rocks many times but had never experienced it from the water, there are so many things that can’t be viewed from land and several sites where it was nice to get a new and different perspective. 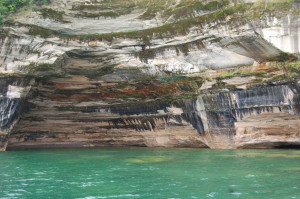 The Pictured Rocks Boat Cruise operates out of Munising and offers many departure times during the day. We chose one of the later, extra time ones in order to get a view of Spray Falls (worth it as you will see). Despite leaving the harbor to an overcast sky and light rain, it did not hinder our experience or my picture taking – the lower deck has windows that open for full viewing and I was able to capture many great pictures while barely getting myself or my camera wet. The Grand Island East Channel Lighthouse and the occasional bald eagle are among the highlights of the trip that aren’t rocks or water. 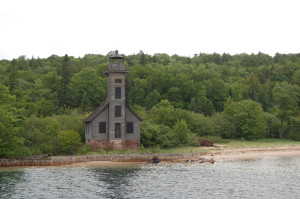 One of the first sights to behold is Miner’s Castle, a popular stop on land, now given a unique perspective from below:

Next up is Bridal Veil Falls, a spring and heavy rain running fall that cascades down an angled rock face – don’t expect to see more than a trickle here in summer months:

Many of the rock formations have names, and the tour guides do a great job of covering these, there is also a detailed list on the boat cruise site linked above.

The colors in the rocks are numerous, as yellow, red, black and other shades pop out in layers among the limestone cliffs, making for stunning photographs as they contrast against the green vegetation on top and the blue waters below:

Grand Portal Point is a popular site, featuring an arch rock formation that will eventually succumb to the Lake Superior waves as others have before it:

The Indian Head rock formation just out into the water, making what looks like a nose stick out:

This cruise definitely gets you up close to the cliffs!

While the main part of Chapel Falls is reached by hiking inland, the lower falls are right along Lake Superior as the river ends:

Chapel Rock is often photographed at sunset, but still impresses during daylight:

Finally, the highlight of Spray Falls is reached, as Spray Creek plunges 70 feet into Lake Superior:

Wow! From here the tour retraces its steps, so if you were on the “wrong side” on the way out, don’t worry! On calm days the boat will back into a cove, putting you so close it seems you can touch the ‘painted’ cliffs. As you return to Munising, watch the shoreline near the high school for the white tower Munising Range Lights, guiding you back in.