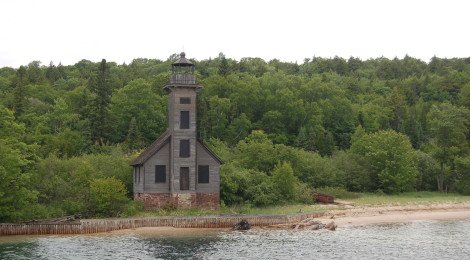 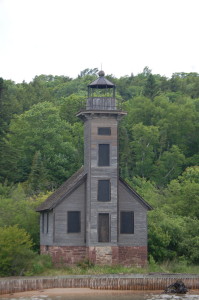 Grand Island is a 13,500 acre island that is National Recreation area in Lake Superior just offshore of Munising. It features cliffs similar to those found in Pictured Rocks National Lakeshore and it is a popular summer destination for camping, fishing, hiking, hunting, and mountain biking. The island is home to a healthy population of black bears and some privately owned land. Two lighthouses are included in the privately owned land: the Grand Island North Lighthouse and today’s featured lighthouse, the Grand Island East Channel Lighthouse. 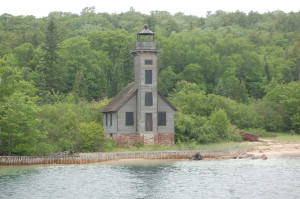 Frequently photographed due to its picturesque, aged appearance and scenic setting. It is possible to get a view of the lighthouse from Sand Point east of Munising in the Pictured Rocks National Lakeshore, but the best views come from one of the tour boats that runs out of Munising. The Glass Bottom Shipwreck Tours boat cruise passes by the lighthouse and spends time above shipwrecks near Grand Island, the Pictured Rocks Boat Cruise trip passes by the lighthouse, and the Riptide Ride circles Grand Island providing views of both lighthouses. The ferry service that runs to the island does not pass either one of the lighthouses. 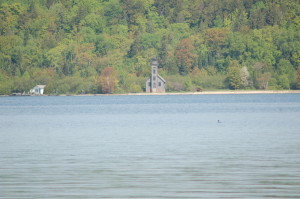 The Grand Island East Channel Lighthouse first went into service in 1868, helping guide mariners into Munising harbor. In 1905 the Munising Range Lights were constructed, effectively rendering this light obsolete and replacing it. The tower stands 45 feet tall and is capped with a black metal lantern room, while the rest of the structure is wood in a schoolhouse style with a very weathered appearance. 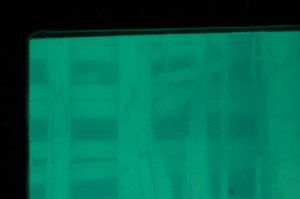 On one of our visits to this light while on the shipwreck tour, we were told of the volunteers who spent a month constructing a seawall in front of the lighthouse in 2000. Before that, there were serious concerns that this lighthouse would succumb to shore erosion and the elements – we are incredibly grateful that it was preserved so future visitors can enjoy seeing this historic landmark.