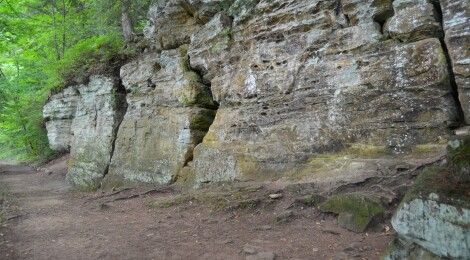 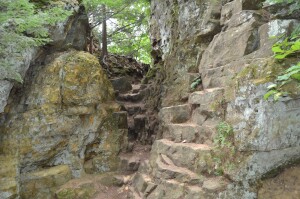 Grand Ledge in Eaton County gets its name from the 60 foot tall sandstone ledges that rise above both sides of the Grand River. I had visited the ledges once before (on a high school field trip nearly 20 years ago) and this year we decided to return to check out the hiking trails at Fitzgerald Park and get some photographs of the ledges. While some of the ledges at Oak Park on the east bank of the river are open for recreational rock climbing, the ones at Fitzgerald Park are preserved for observation only. 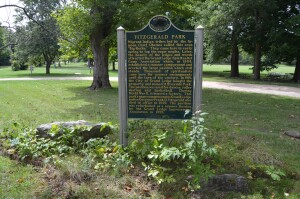 A Michigan historical marker near the parking lot tells us just how important this area has been in Grand Ledge history: “Migrant Indian tribes led by famous Chief Okemos called this area “Big Rocks.” They came here in early spring to tap the sugar maples. Later, the beauty of the ledges and woods attracted the Grand Ledge Spiritualist Camp Association which, in 1894, established a summer camp and erected the large pavilion which still stands. Thousands of spiritualists came here for summer encampments until the turn of the century. In 1919, the City of Grand Ledge bought the property and named it Riverside Park. The pavilion was used for dances, roller skating and basketball. During World War II, it housed a factory. This park’s name commemorates Grand Ledge native Governor Frank D. Fitzgerald who died in office in 1939. The pavilion was refurbished as a summer theater by the Grand Ledge Improvement Association in 1955.” 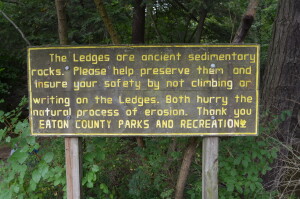 Fitzgerald Park offers miles of trails that wind their way through the 78-acre park. Most are short segments and all trails are well-marked and well-worn. One of the most popular trails, for good reason, is the Ledges Trail. We headed there first after arriving at the park. A sign reminding visitors of how delicate this natural area is greeted us once we got down to river level: “The Ledges are ancient sedimentary rocks. Please help preserve them and insure your safety by not climbing or writing on the ledges. Both hurry the natural process of erosion.” 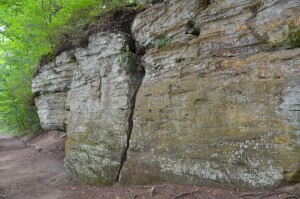 The Ledges Trail is less than a half mile long, but it packs a lot of scenery into a short distance. There are several side trails worth exploring, and the main trail is well-worn but not flat. While running parallel to the river, this trail passes many rock outcroppings worth taking a closer look at. Some are as tall as 40 feet, and anyone who has visited Pictured Rocks National Lakeshore in the Upper Peninsula will notice some similarities here. The Ledges Trail ends at the old train bridge over the river, but a trail continues on and eventually leads to downtown Grand Ledge and Island Park (passing by privately owned land on both sides, please be respectful). 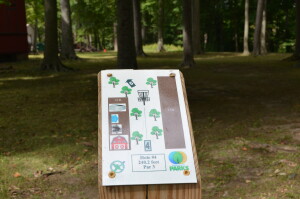 Fitzgerald Park is also home to a very popular 18 hole disc golf course. Players will find themselves challenged by the tree-filled terrain, long uphills, and a lot of holes in the woods near the Acorn Loop Trail. 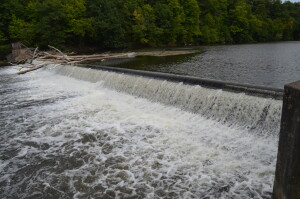 A parking area by the Grand Ledge Dam (downhill past the wastewater treatment plant) allows access for fishing. There is a fish ladder next to the dam, allowing fish upstream without having to jump the dam. Several trails intersect here including the Island Trail shown below. Things could change here in the future as the county has proposed expanding the wastewater treatment plant and reducing the park’s footprint (read more here). 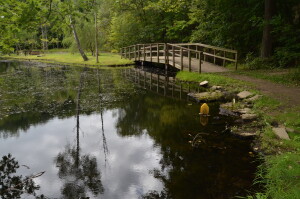 Other facilities at this park include a baseball field, a volleyball court, pavilions and picnic space, a playground, cross country skiing trails, and a winter sledding hill. The Ledges Playhouse normally offers summer theatre in a 300+ seat venue but current plans for events are on hold due to the pandemic. 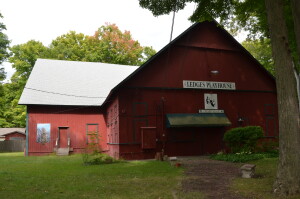 The park charges a $3 entrance fee ($5 for non-residents), and we considered that a small price to pay for everything the park had to offer. If that still seems steep to you, you could park at Island Park and walk in to the Ledges Trail from the south. You can see on the map below just how close Fitzgerald Park is to Island Park, Oak Park, and Lincoln Brick Park: