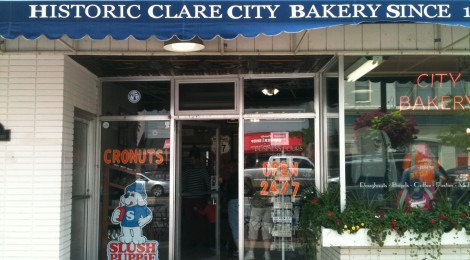 Many Michigan residents are already familiar with the appropriately named Cops and Doughnuts Bakery in Clare, Michigan. The bakery, which was taken over by nine Clare police officers in 2009, is a frequent destination for locals and tourists to the Clare area. The story and success of the bakery recently led to a national news segment on NBC Nightly News with Lester Holt. That segment should lead to some increased exposure and business for this great Michigan destination.

The Clare City Bakery opened in 1896 and was a staple of the small town for years. When the bakery was within weeks of closing, the nine members of the local police department pooled together to purchase the bakery and have owned it since. The small town of Clare is home to just over 3,000 residents (3,118 in 2010 Census). Clare was founded in 1870 and officially became a city in 1891, making this bakery date back to almost the very beginning. 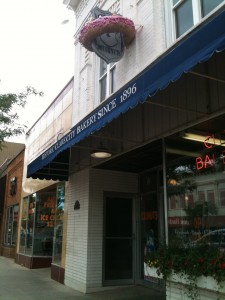 Cops and Doughnuts (Facebook Page) serves doughnuts, cookies, pies, bars, elephant ears, baked read, and other items. Many of the items are also available to have shipped across the country. Cops and Doughnuts is a popular shipper of paczkis during Fat Tuesday and often will get orders from all 50 states. The famous “Bacon Squealer” donut is not available to be shipped though.

Along with the popular bakery, which is open 24 hours a day and 362 days a year, Cops and Doughnuts offers a great selection of merchandise. You can find t-shirts and souvenirs from your visit. There is also a diner that serves pulled pork sandwiches and other breakfast and lunch options. The diner is open 6am to 4pm. 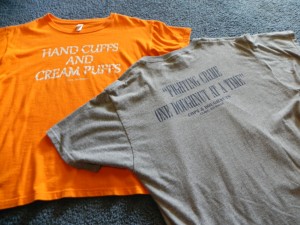 T-Shirts purchased at Cops and Doughnuts

NBC News visited the original Cops and Doughnuts location in Clare on May 18th. The video segment has been viewed more than 500,000 times. Network correspondent Kevin Tibbles interviewed several of the co-founders during his visit.

Cops and Doughnuts is expanding in the state and the news segment could lead to quick expansion if the business is ready for it. There are now two “Precincts” of Cops and Doughnuts open in Ludington and Gaylord. A new precinct in Bay City is also on the schedule to open this summer as well.

The new Ludington location opened in May after taking over the McDonald’s Bakery. The McDonald’s Bakery was opened in 1898 as Sutherland’s Bakery. This location will now be known as Cops and Doughnuts – Sutherland Precinct. Along with its own products, Cops and Doughnuts will keep making McDonald’s breads and buns, which are sold to local stores and schools. Lines were out the door on opening day for this newest location. While all donuts were popular for this new location, it was the custard filled long john with chocolate frosting that was announced as the top seller. The bacon squealers also sold out quickly.

Cops and Doughnuts is also looking to expand outside of Michigan. A bakery in South Bend, Indiana was purchased and will be a new precinct soon. The Dainty Maid Bake Shop had closed after the owner passed away. Cops and Doughnuts owners recently said, “Soon we will be offering franchise opportunities coast to coast nationwide”. 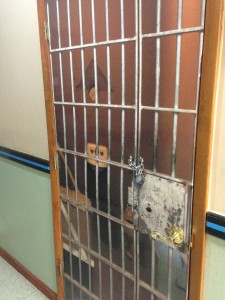 Bathroom door at Cops and Doughnuts in Clare

If you plan on visiting any of the areas mentioned above (Clare, Gaylord, Ludington, Bay City) over the summer or in the near future, make sure you put a visit to Cops and Doughnuts on the agenda. This is one of the best run doughnut shops in the state. It is nice to see this great small town story get national attention for Clare and the state of Michigan.