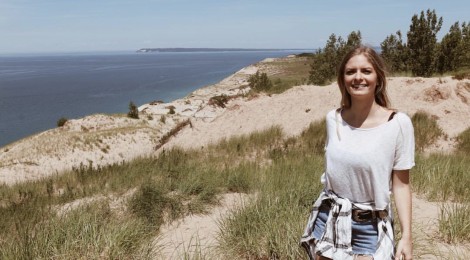 My 5 Favorite Places in Michigan: Lauren Duski – The Voice Contestant and Michigan Native

Lauren Duski, a Gaylord, Michigan native is competing on the current season of “The Voice”. The show, which airs Mondays and Tuesdays at 8pm, is a competition between singers to be crowned the winner all with the help of four celebrity judges. The show’s unique blind audition process has the contestants sing on stage with the judges chairs turned. The judges turn if they like what they hear and then compete against each other to win over the contestant to their team where they mentor them along the way. 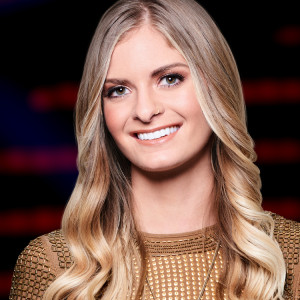 With a rendition of Jewel’s “You Were Meant For Me”, Duski got three of the four judges to turn their chairs and fight over her. Adam Levine, Blake Shelton, and Gwen Stefani all turned their chairs leaving the decision to Duski. Ultimately, Lauren chose to join Team Blake.

If you watch the audition video (in article below), the praise for Duski is amazing and she became an early candidate to win the entire season. Adam said, “And I think it would be the most refreshing thing in this show’s history for someone like you to win “The Voice”.” Shelton added, “You’re somebody who clearly can win this thing.” Lauren’s rendition of “You Were Meant For Me”, which you can purchase on iTunes, also earned praise from original singer Jewel.

Originally from Gaylord, Michigan, Lauren has been performing in front of audiences since the age of 7. Several local performances in her hometown led to many years of traveling across Northern Michigan with a band, performing classic country hits. Those shows allowed her the opportunity to open for acts including: Lonestar, Randy Travis, Confederate Railroad, and Bill Anderson. She began songwriting in middle school after getting her first guitar. She started posting videos of original songs and covers on Youtube while in high school, gaining significant views worldwide. Later as a student at the University of Michigan, Lauren focused more on songwriting but managed to keep up with local performances opening for Gloriana and Thompson Square. After graduating in the spring of 2013 with her Bachelors of Science in Biopsychology, Cognition and Neuroscience, she put her plans of attending dental school aside. She spent a few months in Chicago after graduation with opportunities to record original and commercial material, but Nashville became home in early 2014. There, she hit the ground running with songwriters such as Bill Luther (Tim McGraw), and has been crafting a group of songs that she considers her best work to date.  After auditioning for The Voice in Atlanta, GA, Lauren found herself on stage singing for four of the biggest names in music.  She was able to turn the heads of 3 out of 4 coaches, landing her a spot on Blake Shelton’s team.
You can find Lauren on the Battle portion of the show next.  To keep up with Lauren and updates with her music – Follow Lauren Duski on Twitter and Facebook for all the latest updates.  You can also check out more at www.laurenduski.com We recently asked the Michigan native to share with us her five favorite places in Michigan. This is one of our favorite segments that has seen us interview local celebrities, mayors, and news personalities. The My 5 Favorite Places in Michigan gives our readers new places to visit and/or add to their bucket list. While Duski has left Michigan for her professional career, she was and will always be a Michigander. Here are Lauren Duski’s five favorite places in Michigan, in her words. Photos provided by Lauren as well. 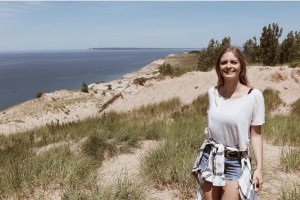 Sleeping Bear is one of the most breath taking places I have ever been.  I remember as a kid visiting for the first time with the Interlochen Arts summer camp, and being challenged to become a “Dune Goon.”  They have this competition every summer, and to become a “goon” you have to race up and down the dune 30 times.  Little 9 year old Lauren became a “goon” no problem – except I was a little disappointed there wasn’t pizza waiting for us afterwards.  Over the years, my family and I would take trips from Gaylord to visit the dunes, and it’s like the first time every time.  I have yet to make the plummet down to Lake Michigan and back, but it’s on my bucket list.  My favorite days are when we’d have lunch in Traverse City at Amical, then head to the dunes for a day of sightseeing. 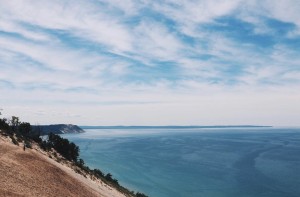 I had the chance to spend a lot of time in Holland a few years back both in the summer and winter.  It didn’t take long for me to fall in love with Holland.  Lake Michigan is my favorite Great Lake, and there is no better place in the summertime than on the beach of Lake Michigan.  Both in the summer and winter, we would spend a lot of time at the beach and hike all around the dunes. It was incredible to see the beach change through the seasons.  I had the honor of playing a few shows at Our Brewing Company downtown with some buddies of mine.  Everyone in Holland is so friendly – even though I loved attending the University of Michigan, spending that much time in Holland really made me wish I had attended Hope college at times! 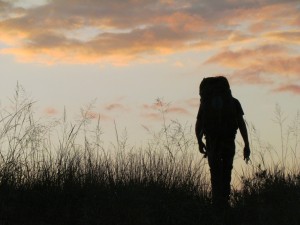 Around the same time I was frequenting Holland, I got into Backpacking – which soon became my favorite thing to do in the summer. My favorite spot in Michigan to camp out was on the beach at the Nordhouse Dunes in Ludington.  Talk about a slice of heaven.  My friends and I would camp out for a whole weekend – Deer Camp Whiskey and fire pizza’s at night, bandana coffee in the morning followed by a day at the beach on Lake Michigan — it really doesn’t get any better.  The sunsets were unreal, and every once in a while we’d catch a storm rolling in across the lake.  Some of my favorite memories are on Lake Michigan. 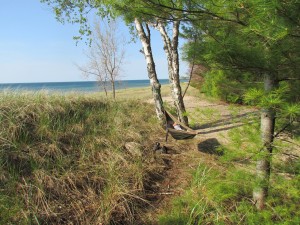 Talk about true heartache.  I have never felt my heart break the way it did the day I left Ann Arbor.  After spending four years at the University of Michigan, I honestly thought I’d never leave.  Although I truly wanted to pursue my dreams of music, Ann Arbor had me incredibly temped to spend four more years in dental school.  JUST so I could continue to live in Ann Arbor! There is truly no place like it in Michigan.  Ann Arbor in the fall on a football Saturday – a dream.  I have to many favorite spots there to count.  I love how culturally diverse the city is – whether through the university, cuisine, or nightlife, Ann Arbor is a city for everyone.  If I ever met anyone who didn’t like Ann Arbor – I don’t think we could be friends (just kidding, kind of). 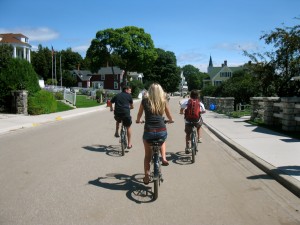 I was really lucky growing up in Gaylord to have Mackinac Island so close!  Every summer my family would visit to ride bike’s around the island, eat an obscene amount of fudge, and enjoy the slower pace.  Even as an adult the island feels magical.  There’s something about sitting on the porch of the Grand Hotel that makes you feel like you’re back in the 40’s.   We want to thank Lauren Duski for taking the time to share her five favorite places in Michigan with our readers. If you enjoyed this piece, be sure to check out other favorite places in Michigan from our guest writers.