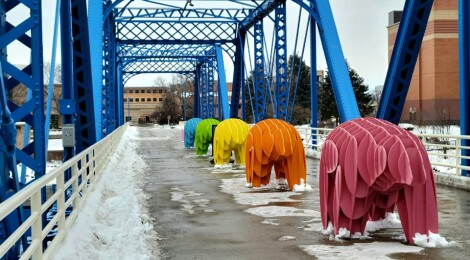 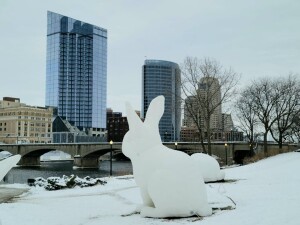 The World of Winter 2022 Festival kicked off on Friday, January 7th. Downtown Grand Rapids will host more than 40 art installations and 50 ice sculptures spread throughout downtown as part of this free and fun event that runs until March 6th. “The World of Winter Festival takes advantage of Michigan’s cold climate to provide interesting ways for people to experience and enjoy the season. This Festival aspires to make Grand Rapids a more active winter city – which makes Grand Rapids a more active year-round city. All programming and activities are FREE, socially-distanced for these pandemic times and geared for both families and adults.” (Head over to https://worldofwintergr.com/ for more information) We made a quick trip downtown on January 8th to get an early look at some of the exhibits. Here’s a look at what we saw and what we are looking forward to the most when we head back in a couple weeks to see the art at night. 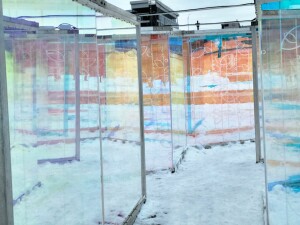 There are 11 large art installations: Bunnies of Intrude, Submergence, the Singing Tree, Massimals: Grand Rapids, Light Maze, Crank Zappa, Trumpet Flowers, Control No Control, The Loop, Ice Park, and Manido Bawating. Not all of these have been set up yet but a few have. Locations include Ah-Nab-Awen Park, the Grand Rapids Public Museum, 555 Monroe, Sixth Street Park, the Gillett Bridge, and the Blue Bridge. 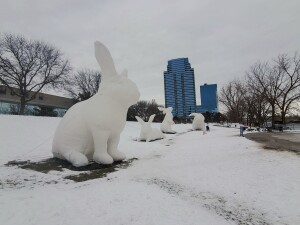 Bunnies of Intrude (Ah-Nab-Awen Park) – “A large outdoor art installation brought to you in partnership with Parer Studio based in Australia. Some very large white rabbits, illuminated in stark white light, have been invading the planet. The bunnies of Intrude stand enormous, yet relaxed in their given new homes. Rabbits in artist Amanda Parer’s native Australia are a feral species, they leave a trail of ecological destruction wherever they go and defy attempts at eradication. First introduced by white settlers in 1788, they have caused a great imbalance in the country’s endemic species. Yet, the rabbit is also an animal of contradiction. They represent the fairy-tale animals of our childhood, of furry innocence, frolicking through idyllic fields. Intrude deliberately evokes this cutesy image, and strong visual humor to lure you into the artwork only to reveal the more serious environmental messages in the work. The bunnies of Intrude are huge, the size referencing “the elephant in the room”, the problem, like our mismanagement of the environment, big, but one that we too easily ignore.” These large bunnies will be illuminated at night and this exhibit is scheduled to run through January 31st. 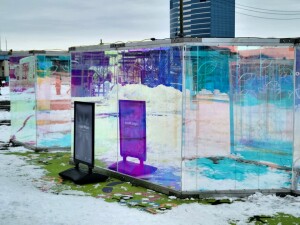 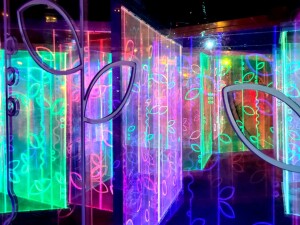 Light Maze (555 Monroe) – “A large light-based art installation brought to you in partnership with Ximenez Group based in Spain. Designed by the German architect Ben Busche, from Brut Deluxe studio, the light maze was born with the aim of offering an innovative and immersive experience.” This will no doubt be one of the most popular exhibits to see at night! 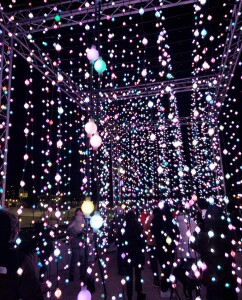 Submergence (Gillett Bridge) – It looked like work was almost complete on this exhibit and it’s definitely one that will need to be seen at night. “Submergence is a large, immersive, walk-through experience created by SquidSoup based in the United Kingdom. The installation transforms space into a hybrid environment where virtual and physical worlds coincide. As you enter the piece, you are walking into a space occupied by both real and virtual components, and you can affect both. Submergence has been shown in over 70 spaces and events on six continents.”

Control No Control (Ah-Nab-Awen Park) – This exhibit is scheduled for February 11-17th. “CONTROL NO CONTROL is a large-scale interactive installation in the form of a minimalistic geometric structure, true to Studio Iregular’s signature style. Created in 2011 in Montreal for Igloofest, it has since been presented over 35 times around the world.” 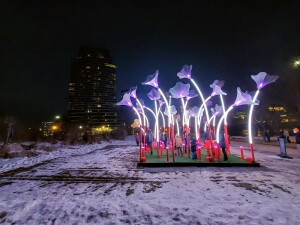 Trumpet Flowers (Ah-Nab-Awen Park) – This exhibit should be up and running by next weekend (January 14). “Make your own spectacular floral symphony of sound and light or catch one of the scheduled animated musical scores throughout the evening. Inspired by vintage gramophones, Trumpet Flowers will shock and surprise as the entire world periodically bursts to life and plays its own commissioned musical score: a piece composed and played by Otis Studio and some of Sydney’s finest Jazz musicians. Every tuba, trumpet, trombone and drum sound in Trumpet Flowers’ repertoire is an individual live recorded and energetic moment at your fingertips to experiment with.” 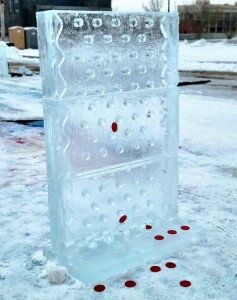 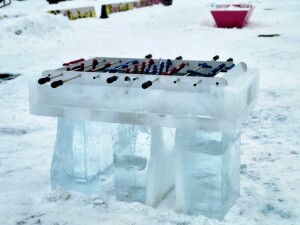 Ice Park (555 Monroe) – “Shuffleboard, Plinko, Foosball, Chess, Checkers , Cornhole, Putt putt holes, Ice throne photo op.” This exhibit lasts until things melt so enjoy it while we have a stretch of cold weather. It was very cool to see the detail work that went into creating all of these interactive sculptures. 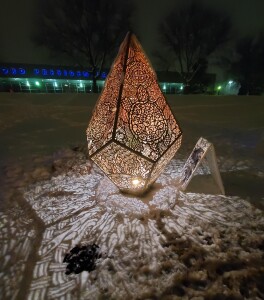 Manidoo Bawating (Sixth Street Park) – This is a new permanent location for one of the HYBYCOZO pieces that was featured in Ah-Nab-Awen Park last year. ““Manidoo Bawating” (pronounced Ma-ni-doo Baa-wa-ting) is an 11-foot-tall steel sculpture custom-designed to represent and honor important symbols and unique traditions of the Native American community that thrived along the Grand River and throughout the Great Lakes region.”

The Loop (555 Monroe) – This exhibit will be added to the 555 Lot on Monroe on February 4th. “This illuminated musical installation, featuring a distinctive retro-futuristic look, uses cylinders two meters in diameter and plays short flipbook-style movies inspired by Quebec literature.  The work is inspired by the zoetrope, an optical toy invented in the 19th century. Loop is a hybrid of the music box, zoetrope and railway handcar.” 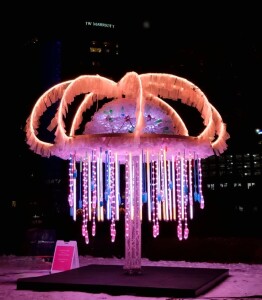 Crank Zappa (Grand Rapids Public Museum) – This installation is scheduled for January 14th. “Crank Zappa Jellyfish an interactive sculpture created from plastic waste. Lights animate and respond to touch sensors at the ends of the tentacles. The sculpture is also accompanied by music and voice combining to bring the character of Crank Zappa to life, as well as educating the public on plastic waste in an accessible and engaging way. Crank Zappa is completely constructed from single use plastic items including 1,000 plastic bags, straws and 800 plastic bottles that were salvaged from Scotts Creek and 1,200 meters of recycled twine that was weaved together by 40 volunteers. As visitors gather under Crank, he electrifies and animates in response to human touch.” 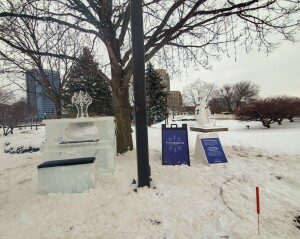 Singing Tree (Grand Rapids Public Museum) – Moving to the south lawn of the museum after spending last winter at Sixth Street Park, the Singing Tree runs after dark each day. “An interactive lighting experience powered by Aurora real-time sound-to-light mapping system. Operates after dark. Sing or talk to the tree and the tree will light up based on the sounds you make.” 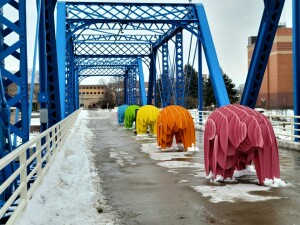 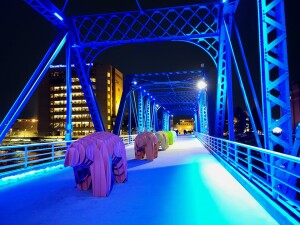 Massimals: Grand Rapids (Blue Bridge) – One of my favorites from the day as it is the most colorful and eye catching. Created by artist Jason Scroggin, “Massimals are abstractions of animal forms built in the manner of massing study models traditionally produced in an architectural design practice. When built at full scale they became a means to explore the relationship between complex form, material, and fabrication.” 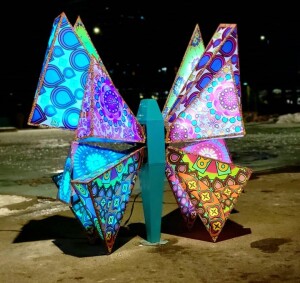 In addition to the large art installations there are many other small exhibits throughout downtown, and winter window art at many of the local businesses. Head to https://worldofwintergr.com/events to see some of the special events running throughout the World of Winter Festival. The ValentICE Festival returns February 11-18 and will have dozens of ice sculptures spread across the downtown area.

We had a blast at last year’s World of Winter Festival, which makes us even more excited for the World of Winter 2022 art installations and events. Check back here as we will continue to add pictures as more exhibits go up.