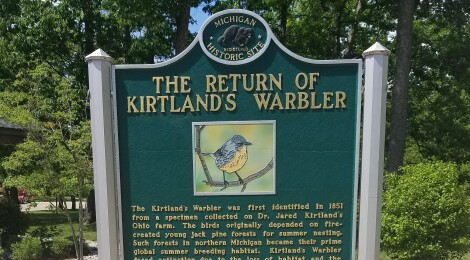 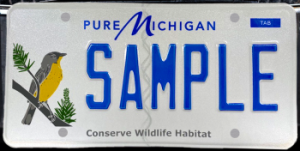 The Michigan DNR recently announced an exciting change for 2022: The Kirtland’s Warbler will be replacing the Elk on the “Conserve Wildlife Habitat” license plates! From 2001-2018 these plates featured the Loon, then the Elk took over in 2018 to coincide with the 100 year anniversary of the elk’s reintroduction in Michigan. Like the elk and loon, the Kirtland’s Warbler is a Michigan conservation success story and that’s why we think it’s an excellent choice and we continue to love seeing funraising directed towards Michigan lighthouses and other causes. Today we will take a look at the history of this bird as well as look at what the plate raises funds for and how you can get one. 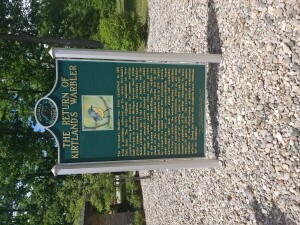 We learned a lot about the Kirtland’s Warbler from a Michigan historical marker at the I-75 northbound rest area near Grayling: “The Kirtland’s Warbler was first identified in 1851 from a specimen collected on Dr. Jared Kirtland’s Ohio farm. The birds originally depended on fire-created young jack pine forests for summer nesting. Such forests in northern Michigan became their prime global summer breeding habitat. Kirtland’s Warbler faced extinction due to the loss of habitat and the invasion of parasitic brown-headed cowbirds, which lay eggs in warbler nests and whose young survive at the expense of warbler nestlings. The warbler was placed on the federal endangered species list in 1967 and the state endangered species list in 1976. Guided by research to mimic natural fire processes, government agencies and private conservationists began harvesting older jack pine stands and replanting the trees to restore the warblers’ habitat. In addition, cowbird populations were controlled. From an all-time modern low of 167 nesting pairs in 1974 and 1987, the summer population of the warbler rebounded to more than 1,700 pairs in 2007. The recovery of the species testifies to the effectiveness of habitat restoration efforts. During the winter the songbirds leave Michigan for the Bahamas.” 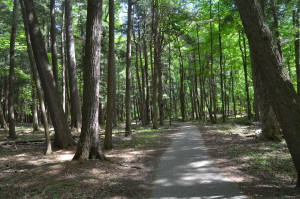 The DNR provides quite a bit of information about the plate and how its funds are used on its website. “Purchase the $35 specialty license plate and $25 of purchase will go to the Nongame Wildlife Fund! Species management efforts are aimed at restoring endangered and threatened animals and plants and keeping common species common. Peregrine falcons, trumpeter swans, gray wolves, Kirtland’s warblers, Mitchell’s satyrs, lake sturgeon and common terns are just a few of the hundreds of wildlife species that have benefited from projects supported through the trust fund. Wildlife recreation also has benefited. The fund supports a network of more than 100 watchable wildlife sites throughout Michigan. These sites provide a variety of opportunities to view some of our state’s most popular wildlife species. Wildlife education is the program’s third major focus. Over the years, a number of educational programs have been supported, including distribution of more than three million habitat and species posters, numerous interpretive trails, and other signs and programs. Since its inception, the Nongame Fish and Wildlife Trust Fund has raised more than $9.5 million in support of critical projects for nongame species. In partnership with the Secretary of State’s office, the fundraising vehicle registration plate provides Michigan’s citizens with an opportunity to help the program continue and grow.”