Browse: Home   /   Vacation   /   Lake of the Clouds is One of Michigan’s Underrated Vacation Gems 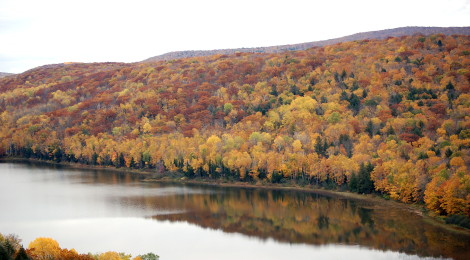 Earlier this summer, I had the chance to journey back to one of my favorite spots in the entire state. Standing more than 1,000 feet above sea level and seeing the natural beauty of Lake of the Clouds and the Porcupine Mountains is a truly majestic feeling and I believe everyone in the state should enjoy this once in their lifetime. 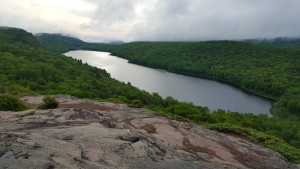 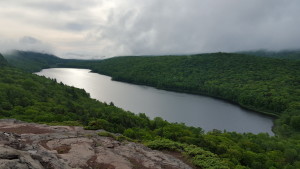 The 133 acres that make up the Lake of the Clouds area are some of the most beautiful you will find in the state. You can look out and see mountains, forests, lake scenery, and wildlife all in one scan from left to right. The overlook is rather peaceful as well and if you’re lucky enough to be the only visitors at the time, as we were recently, you can really enjoy this natural beauty for all its worth. Lake of the Clouds was formed naturally, which gave the destination a place on our 7 natural wonders of the Upper Peninsula list. 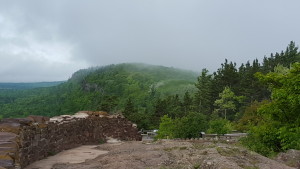 The overlook that puts you above Lake of the Clouds is 1076 feet above sea. This falls well shy of the state’s highest point (Mt. Arvon 1978 feet), but the view from above here is unbeatable. It’s almost like looking at a painting when you take in the colors offered up in the region. A trip to Lake of the Clouds is even more stunning during fall, when Michigan’s fall color photo opportunities rival any state. 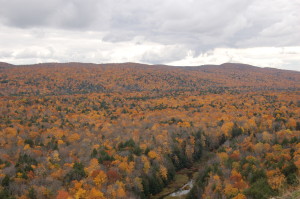 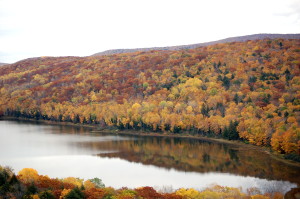 Another great aspect of Lake of the Clouds is the handicap accessible ramp that leads to a second outlook. This ramp was added several years ago and offers stunning views as well. For parents, that also means you can push a stroller along this path rather than carry your kids up onto large rocks to get the full view. 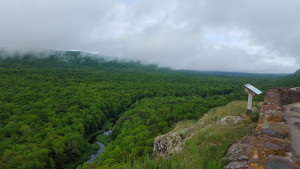 The Lake of the Clouds dumps into the Carp River, which winds into Lake Superior (see must visits on the Lake Superior Circle Tour). While at Lake of the Clouds it is not uncommon to see at least one fisherman down below. You may also come across hikers, as the state park offers several hiking trails and includes 87 miles of the North Country Trail. 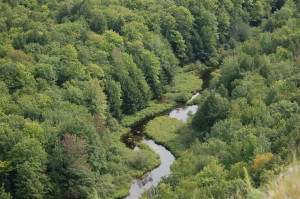 The Porcupine Mountains Wilderness State Park is quickly becoming a new favorite tourist destination. Recently, the park took home second place honors in a national fan poll of the best state park in the nation. When Ginger Zee returned home to Michigan to show off a local landmark, Porcupine Mountains was in her three choices she gave to fans to vote on. Ultimately fans voted for Pictured Rocks, where Good Morning America filmed a live segment at. My vote went to Porcupine Mountains and I was disappointed to see this state wonder finish third.

Lake of the Clouds and the Porcupine Mountains made both my own and Jon’s top five favorite places in Michigan. Returning to Lake of the Clouds this year for the first time in several years was just as amazing as I remembered and left me breathless again. Do yourself a favor and plan a trip with Lake of the Clouds in it, you’ll be glad you did.