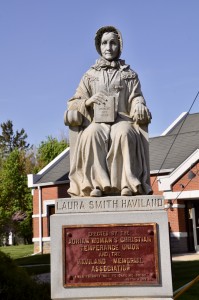 Nothing quite catches the traveler’s eye like a large statue on the side of the road, and while visiting Adrian recently we happened upon the Laura Smith Haviland statue in front of the Lenawee County Historical Museum. This impressive monument pays tribute to a woman who led an incredible life as an abolitionist, teacher, author, Civil war nurse, wife, mother, temperance reformer, women’s suffragist, and humanitarian. It was great to learn about her life through the plaques next to the statue and amazing to see that the statue is still standing strong more than 110 years after it was first dedicated. 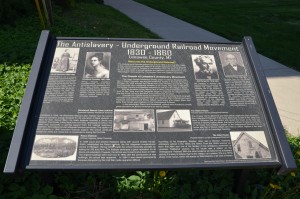 During our stop here we learned that Mrs. Haviland lived from 1808-1898. “Laura Haviland, affectionately known as Aunt Laura, is probably the best-known and most-admired person who ever lived in Lenawee County. The reason for this admiration and acclaim lies in Mrs. Haviland’s life-long devotion to helping others and in the success she so often achieved. Most of Mrs. Haviland’s activities involved helping African-Americans, but she also devoted much of the latter part of her long life to the temperance movement as pushed by the Women’s Christian Temperance Union (the WCTU). No matter what the particular aim of her activity, Mrs. Haviland’s strong religious convictions and great personal courage were always evident and her on no matter what the difficulties and dangers were.” 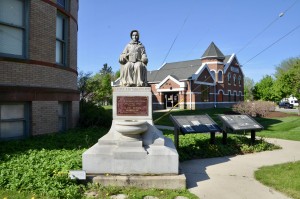 The statue was sculpted by F. Barnicoat of Massachusetts and is made of Rhode Island granite. It stands more than nine feet tall and the figure of Mrs. Haviland is four and a half feet tall. She is depicted sitting and dressed in traditional Quaker garb, holding her book A Woman’s Life Work. The statue was unveiled in June of 1909 and the key speaker was poet Will Carleton, who was from nearby Hudson, Michigan. 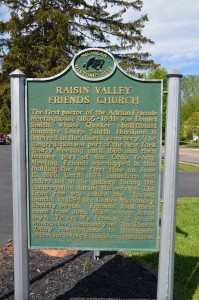 As we visited other historic sites around Adrian we found that the name Laura Smith Haviland came up several times. Michigan historical markers at the Raisin Valley Friends Church (her father was the pastor) and the Adrian Second Baptist Church (founded by African Americans she had convinced to move to Adrian from Washinton D.C.) further cemented the legacy of this amazing woman in the Adrian area. 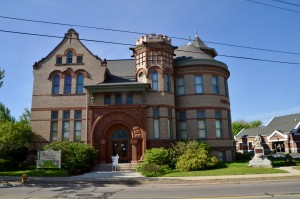 The Laura Smith Haviland statue sits in front of the Lenawee County Historical Museum, which is open to the public Friday and Saturday from 10 a.m. to 2 p.m. Current exhibits include “Migrant Farm Workers’ Strike,” “History of Lenawee County Law Enforcement,” and “Anti-Slavery/Underground Railroad in Lenawee County.”