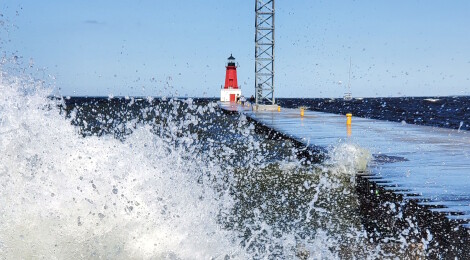 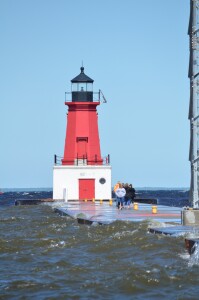 The Menominee North Pier Lighthouse is one of the most recognizable landmarks in Menominee. The bright red tower marks the point where Lake Michigan and the Menominee River meet in the Upper Peninsula’s fourth-largest city. Menominee is located in the southwest part of the U.P., and the river forms the border between it and Marinette, Wisconsin. The lumber industry was king in Menominee in the 19th century and a good portion of the 20th century, today it still has quite a bit of industry (paper, wicker furniture, auto supplies) but also relies on tourism. 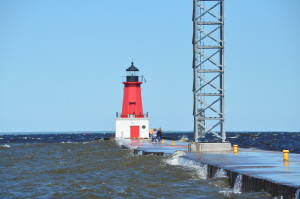 While there has been a lighthouse here since the 1870s, the current structure wasn’t erected until 1927. Things looked a bit different then compared to now, as there was a fog signal building and a catwalk on the pier as well. When the Menominee North Pier Lighthouse was automated in 1972, those two things were removed and the tower was moved on top of the concrete base it stands on today. 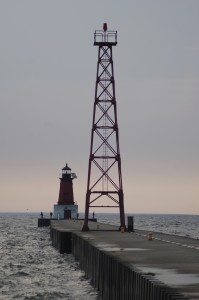 The Menominee North Pier Light is 34 feet tall, but it has a focal point of 46 feet due to the concrete base it stands on. The light works in tandem with the skeletal range light tower (now a more square design than the previous red pyramidal one) on the pier to help guide vessels back into the harbor.

You can find the lighthouse in Lighthouse Ann Arbor Park, which includes a large parking area, boat ramp, and access to the pier and lighthouse. It is possible to walk out the lighthouse, thought not always advisable due to weather conditions. As you can see in some of the pictures, the waves were pretty intense when we visited in June 2020. A previous visit saw us make it partway out only to be turned back by swarms of flies. Someday we will return and make it all the way out to this beautiful red lighthouse! 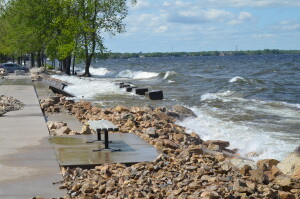 It is easy to visit the Menominee North Pier Lighthouse. From the point where U.S. 41 makes a 90 degree bend in downtown Menominee, head towards the lake on 10th Ave. After about six blocks, turn right on 1st St. and follow it south for 3/4 of a mile then turn onto Harbor Drive. Follow Harbor Drive to its end at Lighthouse Ann Arbor Park. The city owns the lighthouse and offers tours (in non-COVID years) on select dates.