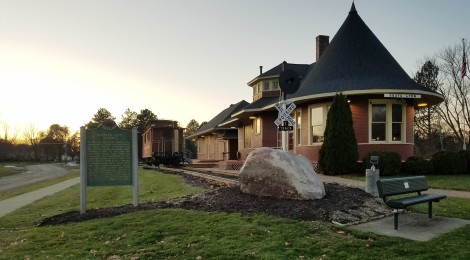 One of the most recognizable landmarks in South Lyon is the Witch’s Hat Depot, a former Grand Trunk Western railroad depot that now serves as the centerpiece of a historical village. The depot is open as a museum on select dates, and the historic village also contains a 1920s caboose, a 1907 schoolhouse, and a 1930s chapel. For current hours of operation and more information on the depot and historic village buildings, visit http://www.southlyonmi.org/residents/community/witch_s_hat_depot.php. 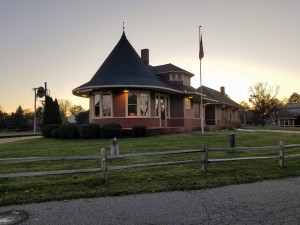 The Michigan historical marker in front of the depot gives a few more details about its history: “In the late nineteenth century, the community of South Lyon was served by three rail lines operating from the 1871 Pere Marquette depot, which burned in 1908. By the time this one-story Queen Anne depot was erected by the Grand Trunk Western railroad system in 1909, only two lines came to South Lyon. Featuring a rounded front and a conical roof, the wood-frame structure served as a passenger station until 1955. The City of South Lyon acquired the depot in 1975 and in 1976 moved it to this site. In 1981 the station began its service as the Witch’s Hat Depot Museum and an community center.”

The Chesapeake & Ohio caboose is a great addition to the museum. It is from the 1920s and the interior has been restored to reflect that time period.

The Washburn School is a 1907 schoolhouse from Green Oak Township that was in use until the 1950s. It was moved to the historical village in the 1980s.

The Little Village Chapel joined the historic village in 2001 and is an example of a “kit” building from the 1930s.

A gazebo ties things together in the park and gives the community a place for gatherings, concerts, weddings, and more. 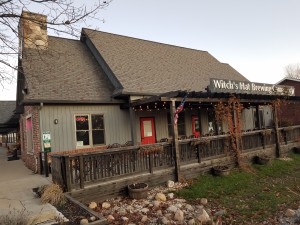 Witch’s Hat Brewing Company is located across the street at 601 S. Lafayette. Since moving to their current location in 2014, Witch’s Hat has steadily grown thanks to great beers like their Night Fury (imperial stout) Defloured NEIPA, Train Hopper IPA, Treat Yo Self (raspberry sour), and The Hat Blueberry Lemonade Gose. Find out more at https://www.witchshatbrewing.com/. Third Monk Brewing Company is located just a few blocks to the north (http://www.thirdmonkbrewingco.com/).