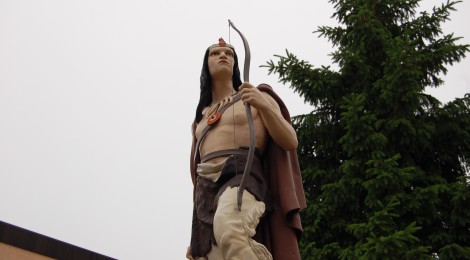 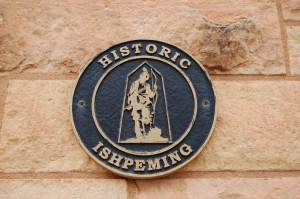 The Upper Peninsula town of Ishpeming lies about 15 miles west of Marquette, and was once a very busy place due to iron ore mining. Many historical landmarks remain behind, and downtown features the Old Ish statue that dates back to 1884.The statue is of a Native American holding a bow, and it sits in front of the Iron Range Agency insurance office at the intersection of Main St. and Cleveland Ave. 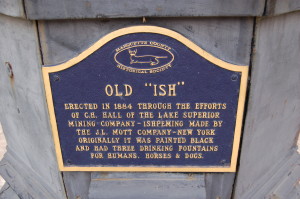 A plaque on the base of the statue reads: “Old Ish. Erected in 1884 through the efforts of C.H. Hall of the Lake Superior Mining Company – Ishpeming. Made by the J.L. Mott Company – New York. Originally it was painted black and had three drinking fountains for humans, horses & dogs.” The fountains are long gone, as are two large blue and white chairs that appear in front of the statue in earlier photos. 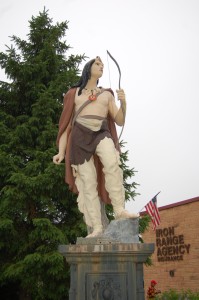 Old Ish is portrayed clad in buckskin wearing a necklace and a cloak and holding a bow in a relaxed posture. The base stands eight feet tall while the statue itself is six feet tall. An article from The Mining Journal details more history of this statue and others like it around the country. Ishpeming comes from an Ojibwe word that means “above” or “on high” – which is fitting as the city is at an elevation of more than 1,400 feet above sea level, 800 feet above Lake Superior. 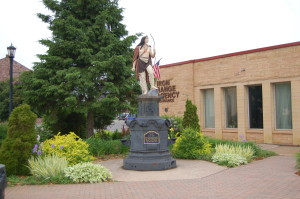 Ishpeming is also home to Da Yoopers Tourist Trap, which we featured in an earlier post. The Cliffs Shaft Mine is open for tours, Black River Falls is a few miles south of town, and the U.S. Ski and Snowboard Hall of Fame is located on U.S. 41.