The largest aquarium in Michigan continues to see strong attendance figures and has been selling out many weekends this summer. We’re here today sharing July special events at Sea Life Aquarium and also a contest being run by the popular Auburn Hills destination.

Back in the late 1980s, a couple of Discovery Channel writers came up with the idea for “Shark Week”. Now a worldwide phenomenon shown on the Discovery Channel in 72 countries, the week showcases many different species of sharks in fiction and non-fiction television programming. While you can sit at home and watch the hours of content, we suggest getting out of the house to celebrate Shark Week with Sea Life Michigan.

Sea Life Michigan has four different species of sharks swimming around. The aquarium has blacknose, blacktip, bonnethead, and nurse sharks. They are among hundreds of other sea species available to view.

We toured Sea Life earlier this year and shared our thoughts and photos with readers. 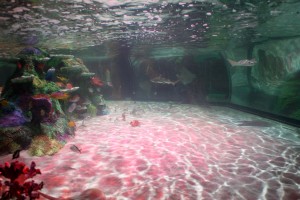 View of One of Several Sharks at the Aquarium

An interesting note is the facts that Shark Week started as an idea on a cocktail napkin. Clark Bunting, who is a Michigan State alumnus is credited as one of the people behind the concept. National Geographic now also runs programming called “Shark Fest” during this week in a copycat move celebrating America’s love of sharks.

Along with Shark Week, Tuesday July 14 marks “Shark Awareness Day”. That could be a particularly good day to visit the aquarium to learn more about the species of sharks kept there. Also remember that shark feedings happen Tuesday, Thursday, and Sunday at 2pm.

While learning about sharks at the aquarium, you can also get an up close look at hundreds of other animal species. This includes Benson, an endangered green sea turtle, who was a new addition recently.

You can enter a contest through Sea Life’s facebook page for the ultimate shark giveaway. The prize includes two tickets to the aquarium, two behind the scenes tickets, and the ability to assist with an actual shark feeding. You can get entries into the drawing by liking Sea Life on Facebook and Twitter. At last tally, there was 152 entries in the contest with a couple days left, so your odds aren’t horrible for this prize.

For another way to celebrate Shark Week, check out Michigan’s own “The Shark”, endurance swimmer Jim Dreyer. Mr. Dreyer shared with us his five favorite places in Michigan.

Moving past Shark Week, if you have kids you’ll want to keep the dates of July 13th through July 24th in mind. Sea Life will be holding Octonauts Training Academy. Based on the hit British show which airs on the Disney Channel, the academy will feature 6 fun zones, and interactive characters. Here’s a look at the calendar:

Each child completing the training will receive a certificate. There is limited availability for each timeslot so be sure to book now.

Octonauts remains popular with children since premiering here in the United States in 2012. The series has aired nearly 100 episodes and combines characteristics from old shows like “Star Trek” and “Thunderbirds”.