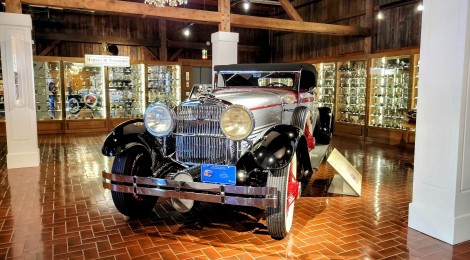 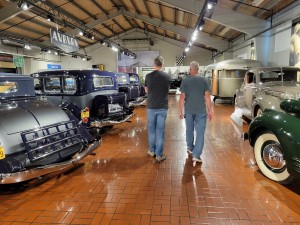 Did you know that North America’s largest automobile museum can be found right here in Michigan? The Gilmore Car Museum is located in Hickory Corners (17 miles northeast of Kalamazoo, 16 miles northwest of Battle Creek) and has more than 400 cars on display throughout its 190,000 square feet of exhibit space. We recently had a chance to check the museum out and left amazed with how many different cars are on display. History buffs, car lovers, families, school groups, and car groups will love it here and there really is something for everyone. The Gilmore Car Museum also hosts an impressive slate of special events, including cruise-ins, concerts, car shows, and the Winter Wonderland holiday lights spectacular. At the bottom of this post you can find a nice photo gallery showcasing some of our favorite shots from our visit. Here are 15 Things You Won’t Want To Miss at Gilmore Car Museum: 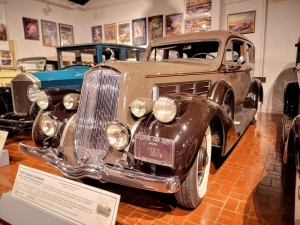 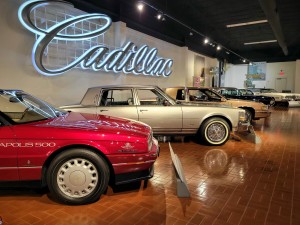 Cadillac-LaSalle Club Museum – Added to the Gilmore museum in 2014, the Cadillac-LaSalle Club Museum is modeled after a 1940s dealership and houses some spectacular looking cars from one of the world’s most recognizable brands. See how Cadillac cars changed from the 1910s to the 1980s, 1990s and into the present day. You can find out more at www.cadillaclasallemuseum.org and be sure to check out the Cadillac Fall Festival held here each September. 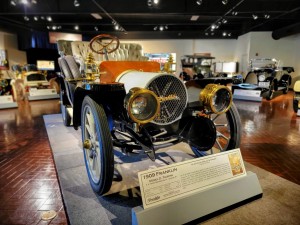 The H.H. Franklin Museum – It is estimated that fewer than 4,000 of the 150,000 Franklin automobiles built from 1902 to 1934 survive, and you’ll find a handful here at the Gilmore Car Museum. These cars are displayed in a re-creation of a Los Angeles Franklin dealership. 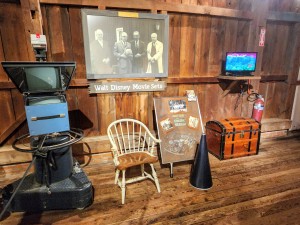 The Gnome-Mobile – The Gilmore Car Museum has the honor of being the only place with a Disney set display outside of the Disney studios. The car and the over-sized studio set from the 1967 film The Gnome-Mobile are proudly displayed in the “G” barn. Walt Disney himself visited the Gilmore collection a few years before the museum opened and donated this great piece of history to the museum a few years later. The Gnome-Mobile film’s plot: “A millionaire and his grandchildren get involved in the plights of some forest gnomes who are searching for the rest of their tribe. While helping them, the millionaire is suspected of being crazy because he’s seeing gnomes. He’s committed, and his grandchildren and the gnomes must find and free him.” DVDs of the movie can be found for sale in the museum’s store. 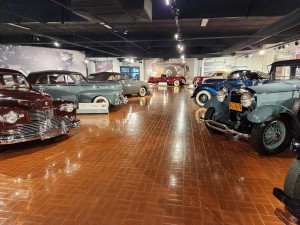 Lincoln Motor Car Heritage Museum – This part of the museum has some truly amazing cars on display. Stroll by a 1922 Lincoln camp car, a 1933 Lincoln-Zephyr sedan, a 1948 Lincoln Continental, and more. You’ll also learn about automotive contributors like Henry Leland and Edsel Ford and how they made Lincoln a sought-after luxury brand known for its style and innovation. 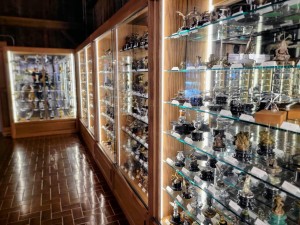 Automobile Mascots – Inside the Classic Car Club of America barn you will see several walls full of glass display cases that house hundreds of automotive mascots (or hood ornaments). If you can think of something (animal, symbol,etc.), there’s a good chance it’s here and was on a car at some point! The Train Depot Building has even more mascots on display! 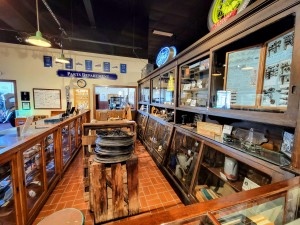 Model A Ford Museum – “The Model A Ford Museum is truly a treat for our hobbyists. Whether you’ve been before or may be planning to go, each visit will present new vehicles and exhibits that will interest young and old alike. At any given time, the museum has about thirty Model A vehicles on display representing all production years, 1928 through 1931, and a variety of body styles from Tudors to Phaetons to Pickups to Firetrucks, etc.” We loved this trip back in time and seeing hoe the Model A was adapted for use as a school bus, fire truck, and police car! 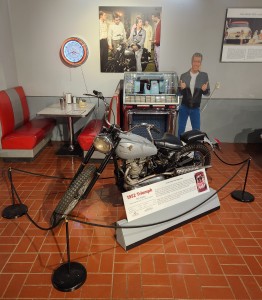 Fonzie’s Triumph motorcycle from Happy Days – It’s not just cars on display here in Hickory Corners, and the Motorcycle Collection boasts some truly rare pieces like a 1947 Indian Chief, a 1910 Cleveland, and a 1952 Triumph Trophy TR5. The Triumph is one that was used by actor Henry Winkler during the filming of the TV show Happy Days. From the signage hear we learned that Winkler started with a Harley Davidson but struggled so they switched to the lighter Triumph that can be seen in most of the show’s run.

Classic Car Club of America Museum – Housed in a restored two-story barn the Classic Car Club of America Museum is definitely one of the highlights of a visit. You’ll find dozens of Duesenberg, Rolls-Royce, Cadillac, Lincoln, and Packard cars on display in all their glory here and you’ll also see rare models like Cord, Stutz, and Delahaye. These are absolutely stunning looking pieces of history that have been well preserved and graciously placed on display for others to enjoy. 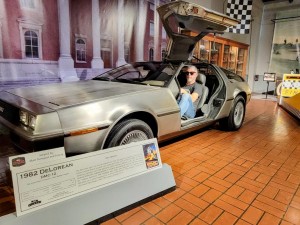 The DeLorean DMC-12 (that you can sit in!) – Inside the main museum building is a 1982 DeLorean DMC-12, made famous in the movie Back to the Future. Fewer than 8,600 of these futuristic cars were produced and even fewer survive. It was awesome to get to sit inside this piece of film history and get some photos! 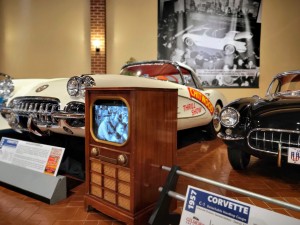 Corvettes! – Sticking around until March of 2023, Greatest Generation: The Evolution of America’s Sports Car gets your museum visit kicked off with a bang as you walk around more than 20 Corvettes and learn how this fast and stylish automobile changed over the years. Highlights include a 1958 Corvette C1 Convertible Hardtop that was used by stunt drive Joie Chitwood, a 2020 Corvette C8 Stingray Convertible, and a 1954 Corvette Nomad. 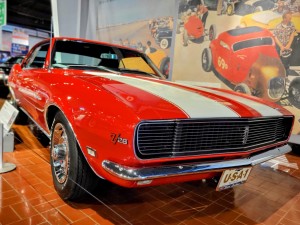 Born to Perform: The Era of the Muscle Car – You’ll see some absolutely stunning cars here, including a 1967 Shelby GT5000 and a 1970 Dodge Challenger. The museum hosts a Muscle Car Meet Up each summer and plans are underway to build a large barn to house even more of these stunning vehicles! 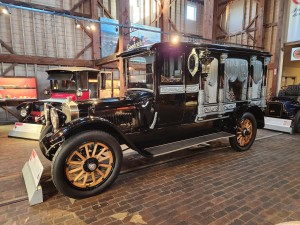 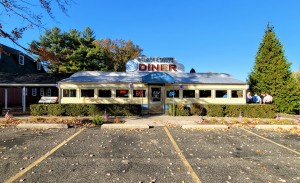 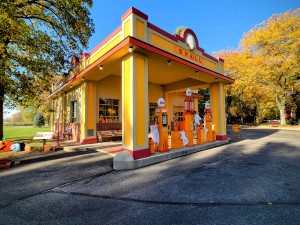 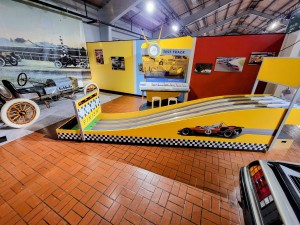 Build your car race track and scavenger hunt for the kids – Right behind the DeLorean visitors with kids can find a fun activity as they build toy race cars and see how they race down a track. You’ll also want to pick up a scavenger hunt sheet near the front desk to help enhance the museum experience! 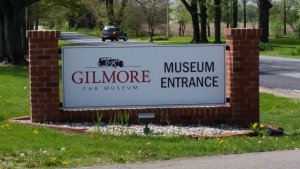 Below you will find a photo gallery from our visit. We can’t say enough good things about this Michigan treasure and are ashamed it took us so long to visit. Make sure you have a visit to the Gilmore Car Museum in Hickory Corners on your schedule for 2023!