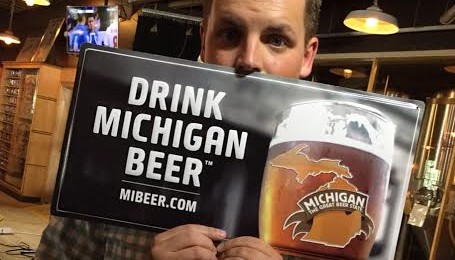 The state of Michigan is full of breweries, one of the main reasons we started this site. Many of these breweries started as small operations and have now grown with huge expansions and distribution deals. The stories behind the rise of Michigan’s beer scene are coming to the small screen with the new “Pure Brews” television show, airing this October on local television. You don’t want to miss this show.

The goal of the show is to show off “the history, the innovation, and the characters that have taken a small brewing revolution and turned it into a nationwide force.” Season one of the series promises to show off: “beers brewed under a sink, strict German purity laws, a taproom within a Detroit assembly-line style production facility, and urban farm growing brewing ingredients, and Gold-medal winning beers”. 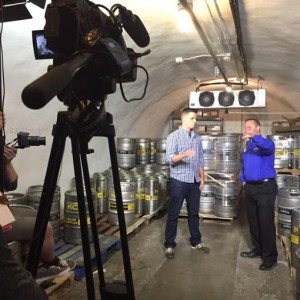 Here is the lineup for Season 1:

The show will air episodes in the Southeast market on CBS Detroit (Channel 62) with the following schedule:

“Pure Brews” was filmed and produced in Michigan with YellowFlag Productions (Southfield, MI). Meijer is the presenting sponsor. 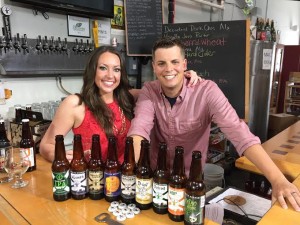 Pure Brews is hosted by Ryan Terpstra and Shannon Long. Terpstra’s name may sound familiar to anyone who has paid attention to high school football. He won the Best Broadcaster Personality Award in 2008 by the Michigan Radio Broadcasters. He spent several years on television and radio giving his honest opinion on sports. Long is the founder and CEO of Brewexport.com and a certified beer server.

Check out this cool preview video and then read on for our interview with Terpstra.

Co-host Ryan Terpstra joined us recently to answer questions we had about the upcoming first season of Pure Brews:

Travel the Mitten: Some people who hear your name (myself included) know you from sports TV and radio. What was it that got your interest piqued in Michigan’s craft beer scene?

Ryan Terpstra: Well, I think most Americans would agree, sports and beer go pretty well together!!!  My passion for Michigan craft beer began 10 years ago when I decided that I enjoyed the taste of an Oberon more than the Water Pilsners from the macro-beer companies that I was drinking back in college.  Since then I’ve become what I consider to be a Michigan craft beer super-fan, and my title on the show even is “professional beer lover”.  When my wife and I started dating, I found out she loved craft beer as well, so a big part of our relationship has been discovering the amazing food and beer that our state has to offer.

TTM: What are your current expectations for Season 1 of Pure Brews?

RT: Well, Season 1 debuts October 3rd in Detroit, and October 4th in West Michigan.  My expectation for this show is that it will connect with folks who are already big fans of Michigan craft beer; and it will hopefully inform and educate viewers who are interested in knowing why micro brewing has become such a big deal.  I think there are elements in this TV show that are going to surprise and entertain people from both sides of the fence, and our goal is to provide a backstage pass to some of Michigan’s best craft beer producers.

TTM: Any plans to go check out some of the breweries in the Upper Peninsula? Any that stand out to you that you are looking forward to visiting?

RT: I would love to visit those awesome Yooper beer-makers for Season 2!  Our plan is to expand the show past the 8 breweries that we feature in Season 1, and to do that, we’re going to expand our footprint throughout the state!  A trip to Keweenaw or to The Vierling might be in order.

TTM: We’ve been pretty impressed with breweries in the Petoskey/Traverse City area. Any plans to make a trip there for future episodes?

RT: Well, my family owns a condo at Shanty Creek, so I’ve been going to Shorts back when you could sit in the corner on some red leather seats from an old Cadillac.  The place looks a little different now haha. They are certainly a force in the MI craft beer scene.  Jolly Pumpkin is a staple on the TC peninsula, and they actually will be featured in Episode 3 this year.

Of course, you have North Peak, Right Brain, and I really enjoyed Petoskey Brewing Company when I visited there last summer.  That area of the state is packed with awesome breweries, and with the fact that so many folks flock to that area, we’ll be there for sure.

TTM: With the current television airings covering the southeast MI and Grand Rapids market, is there a tendency to go to breweries in those regions?

RT: Yeah, for Season 1 we definitely wanted to start off by featuring breweries that people could find in their respective TV markets.  But the great thing about beer lovers is they are willing to travel!  I regularly stop by SE Michigan breweries on my way to and from Chicago; like many others, my family vacations in Northern MI in the summer, and of course people have family all over the state.  So viewers in Grand Rapids easily can swing by Atwater the next time they go to a Tigers game, and someone from Novi can be inspired to stop by Brewery Vivant on their way to Lake Michigan.

And with our partnership with Meijer, if you see something you like, and you’re not going to be in the neighborhood any time soon, they carry over 200 Michigan craft beers.  So chances are you can pick up something from our show right at your local store.

TTM: Meijer is the presenting sponsor for Pure Brews. How did Pure Brews land such a big backer for their first season?

RT: Meijer is obviously a big supporter of Michigan-made products, and that includes craft beer!  And not only do they have the biggest craft beer selection of any retailer in the state, they also offer proper beer glassware, and of course great food.  So craft beer lovers who want to put together a great event can pick up everything they need at their local Meijer.

We really wanted people who watched this show to be able to find and try a beer that they’re interested in.  Meijer is going to debut a revolutionary way to simplify choosing a craft beer that matches your taste palate using their website!  You’re going to hear all about it on Season 1, and trust me, it’s pretty cool.

TTM: Dark Horse Brewing has already been featured on television. Did you approach your segment on them differently?

RT: We approach every brewery differently on this show, because each place has characters and a story totally unique to them.  If you’ve ever been to Dark Horse, you know those guys do things their own way.  That’s really the goal of the show: to introduce viewers to the people behind the beers that they see on the store shelves.  The great thing about shooting at Dark Horse was that they were very comfortable around the cameras, and they had some great lighting and “made-for-TV” spots around the brewery from their previous TV show.

TTM: Which of the eight breweries from season 1 was your personal favorite visit?

RT: That’s a loaded question haha.  My co-host Shannon Long and our whole crew had a blast at every location we shot at, and we were treated EXTREMEMLY well by each and every brewery.

One place that was especially interesting to me was Bastone Brewery in Royal Oak.  I had never visited before, and because they do not distribute yet, I had never tasted their beer either.  They have some fantastic Belgian beer styles at their pub.  Also, Rock, their brewmaster, is a total rockstar, but he’s very big on sanitation.  No one that works at Bastone is allowed in the brewing area except for him, so when he welcomed our cameras into his brewing area, all his co-workers got this look of shock on their faces!

He’s a super-cool guy, and the fact he was willing to walk us through the process that has garnered Bastone a ton of awards was awesome.

TTM: What’s your go-to Michigan beer for kicking back when at home watching sports (if you ever get to)?

RT: Well, I currently have a 4-month old son, so my time is more limited these days.  But whenever I sneak away to my man cave, I’m actually a very seasonal beer drinker.  I love trying new things, and I love sampling the latest seasonal or barrel-aged offerings from around the state.

That said, I often reach for Bell’s Two Hearted Ale.  I love IPA’s, and that title was the first one I really fell in love with.

TTM: What do you hope viewers learn from tuning into Pure Brews?

RT: I really hope that they learn about the people who make the Michigan craft beer scene one of the best in the country.  This show is a great way to make a connection between a beer you have in your fridge and the place where is was first created.  I think Pure Brews will also inspire a few people to make trips out to the different breweries that we profile, and I think that is pretty awesome.  Trying new things, going new places, and meeting new people is what this show is all about.  I’m really excited about this show, and I hope people give us a try and tune in!

We thank Ryan Terpstra for his time answering these questions. We’re looking forward to tuning into the Pure Brews episodes in October. I am definitely curious to learn more about this Meijer craft beer pairing technology. Mr. Terpstra also shared his five favorite places in Michigan with us, which we will share soon.